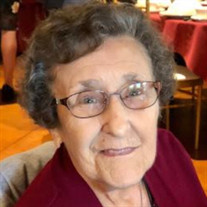 UTICA - Mrs. Antoinette “Toni” (Talerico) Gerardo, age 95, was embraced by her husband, sons, and granddaughter who went before her, when she passed away on Tuesday, February 2, 2021 with her loving family by her side. Born in Utica on August 20, 1925, Antoinette was the daughter of the late Peter and Olivia (Rota) Talerico. She was a graduate of T.R. Proctor High School/Class of 1943. On June 20, 1949 she married Anthony R. Gerardo. She was blessed with an easy-going man; they were a good fit as a compatible couple who shared their affectionate love with one another during their union of 25 years. Anthony passed away on April 1, 1975. During her working years, Toni was employed as an office associate at the T.J. Griffith Printing Company where she met her future husband. She later worked at Goodway Printing until she started a family. She paused to raise her family and then accepted a position at the F.W. Woolworth Company where she rose to Assistant Manager at their Mohawk Street location. She was an asset to the company because she was able to speak Italian, the native language of many to this area. She retired after 20 years of service to a responsibility she served well. Toni’s loved ones were blessed because they belonged to a close-knit multi-generational family that shared a 2-family home, the best life you could have. As a progressive family, they built a house on Copperfield Street, which became the new homestead, for once again, three generations of Gerardos. She was traditional in her homemaking, baking and the many meals she prepared. She also crocheted afghans and read Danielle Steel novels. She was the consummate babysitter, a bonus to both the children as well as herself. The grandkids idolized her, one of the things she was so proud of. Then, the great-grandchildren came into her life, 19 of them to be exact, and they were the little ones who nicknamed her “Gigi” which became a common name for her. To have her family all together warmed her heart, and although she had a quiet mannerism, her actions showed so much love. A charitable woman, Toni was kind to many people and generous to humanitarian organizations. She was a faithful Catholic who prayed the rosary often for comfort, and for peace for herself and others. She was a communicant of St. Anthony & St. Agnes Church. Antoinette is survived by her son and daughter-in-law, Anthony R. Jr. and Donna Gerardo with whom she shared a home; and the memories of her sons and daughter-in-law, Ben and Gail Gerardo, and Peter Gerardo. She also leaves her daughter-in-law, Susan G. Stewart; her grandchildren, Amanda and Eric Faria, Anthony R. Gerardo III and his wife Nicole, (Amanda and Anthony were fortunate enough to be brought up in the same home with their grandma); Anthony and Pamela Gerardo, Alisha, Lorraine, and Erick Corlew, Ben and Jenni Gerardo, Johnathan and Kt Gerardo, Nathan and Jennifer Gerardo, and Victoria Gerardo; Thomas and Rachel Cassidy; and her granddaughter, Ruth Ann Jones who preceded her; and her 19 great-grandchildren. She will also be remembered by her many nieces, nephews, great-nieces, great-nephews, sister-in-law, Johanna Demma; godchild, Christine Mead; and her long-time friend, Josephine Morrock. She was predeceased by her brothers and sisters-in-law, Vincent and Katherine “Nina” Talerico, and Dominick and Louise Talerico; sister and brother-in-law, Theresa and Frank Stewart; and in-laws, Marie Gerardo, Ben “Benny” Gerardo Jr., Frank J. Gerardo, Joseph Gerardo, and Jack Demma. Anthony and his family wish to thank the staff of the ICU at MVHS at St. Elizabeth Medical Center for the kindness and care that they shared with Antoinette. Her daughter-in-law, Donna, was the reason and the hope for Toni’s ability to remain in her own home to the very last days of her life. Her "daughterly" care was such a blessing to her. The family will honor and commemorate Toni’s life at a private time. Relatives and friends are respectfully invited to attend Toni’s funeral service and Celebration of Life which will commence on Monday morning, February 8, 2021 at 11:45 at St. Anthony & St. Agnes Church where her Mass of Christian Burial will be offered. Face masks are required and social distancing and contact tracing will be implemented. Those wishing to express an act of kindness in Toni’s memory may make a contribution to St. Anthony & St. Agnes Church by mail to 422 Tilden Ave., Utica, NY 13501; envelopes will also be available at the service. Interment will follow in Calvary Cemetery where she will be laid to rest beside her husband. During this time of social distancing that we are all experiencing, please take a moment to connect with Toni’s family through the “Memories” section of her obituary at www.EannaceFuneralHome.com. Our prayers go out to all as a sign of our continued support.

UTICA - Mrs. Antoinette &#8220;Toni&#8221; (Talerico) Gerardo, age 95, was embraced by her husband, sons, and granddaughter who went before her, when she passed away on Tuesday, February 2, 2021 with her loving family by her side. Born in... View Obituary & Service Information

The family of Mrs. Antoinette "Toni" (Talerico) Gerardo created this Life Tributes page to make it easy to share your memories.

Send flowers to the Gerardo family.