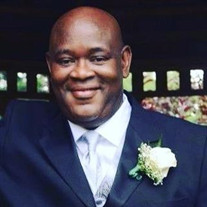 LOUISVILLE, KY/UTICA, NY - Mr. Willie Reed Felton, Jr., age 54, went home to be with the Lord on Friday, January 17, 2020 at Baptist Health Hospital in Louisville. Born in Utica on April 1, 1965, Willie was the son of Emma L. (Wilkerson) and the late Bishop Dr. Willie Reed Felton, Sr. Raised and educated in Utica, Willie attended John F. Hughes Elementary School and was a graduate of Utica Free Academy/Class of 1983. He furthered his studies by attending St. John Fisher College. At one time, he was wed to Regina Jackson Felton and from that union came the blessing of three children. On July 7, 2012 he entered into a second loving union when he married Cheryl Ann Garrant. The couple recently relocated to Kentucky in 2019, where his untimely passing occurred. Previously, Willie held employment positions at local banks and financial institutions. His career allowed him to relocate downstate where he excelled in working for various mortgage companies, lastly holding a position at the Holiday Retirement Company as a General Manager up until his passing. Lovingly known as the “Protector” of his family, Willie’s life revolved around the love he held for his family and the great efforts he made to meet their needs. On the lighter side, he had the personality of a big kid, and he loved to joke around to jump-start his hilarious sense of humor. He knew how to make his company feel important, loved, and special. Willie embraced every endeavor with confidence and competence. He participated in charitable activities and community service efforts through his membership as a Prince Hall Mason. He was an avid fan of New York Giants Football and Syracuse University sports teams. He practically bled orange. He was also fond of golfing because he felt like it was a sport where you could always get better. He enjoyed traveling and he loved the beach, especially Myrtle Beach. And he savored a good cigar, especially with his friend Chris, in real time or FaceTime! Willie was a good man who lived a good life. Willie is survived by his wife, Cheryl Ann; his mother, Emma Wilkerson; his children, Jannitta Felton, Brianna and John McRae, Kayla Holmes, and Brittany Felton and her fiancé Daniel Iascone; his step-children, Latisha Garrant, Brandon Geter and fiancée Nicole Cardarelli, and Bryan Geter; grandchildren, Ella, Rose; and Kimora; step-grandchildren, Tyshawn, Kimberly, Faith, and Unique; and his step-great grandchild, Julian. He also leaves his sisters and their loved ones, Denora and Dennis Davis, Emmila “Carlette” Felton and Jawaad Rasheed, Beverly Lucas, Laura Felton Yager and Robert Yager, Kimberly Felton, Jessica Felton and Emilio Ball; brother and sister-in-law, Bishop Wayne R. Sr. and Deondra Felton; a host of nieces, nephews, great-nieces, great-nephews, cousins, aunts and uncles; mother-in-law, Vera Garrant; father-in-law, James E. Garrant and his wife Harlean; special friend and cousin, Donnell Wallace; and his friends, Chris Harvey, William Minor, Desmond Conner, and Terry Williams. He also leaves behind many lasting friendships he developed during his years in Poughkeepsie. Visitation will be held Sunday, January 26th from 12:30pm- 2:00pm at the House of God Church, 1304 Genesee Street. Willie’s Home Going Celebration will commence on Sunday afternoon at 2:00pm at the House of God Church, officiated by Bishop Wayne R. Felton.

LOUISVILLE, KY/UTICA, NY - Mr. Willie Reed Felton, Jr., age 54, went home to be with the Lord on Friday, January 17, 2020 at Baptist Health Hospital in Louisville. Born in Utica on April 1, 1965, Willie was the son of Emma L. (Wilkerson) and... View Obituary & Service Information

The family of Mr. Willie Reed Felton, Jr. created this Life Tributes page to make it easy to share your memories.