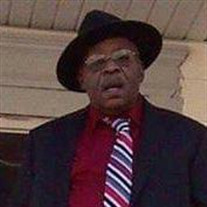 WILLIAM CARTER, SR. “SLICK” SUNRISE SERVICES Mr. William Carter, Sr. “Slick”, age 74, begins his walk with his heavenly father. He is reunited with his loved ones who have gone before him. He passed away on Friday, February 7, 2020, at MVHS at St. Luke’s Healthcare with his loving family by his side. William was born in Superior, Wyoming on an Indian Reservation on June 19, 1945, the son of the late LD and Clara (Hart) Carter. His family resided in Dumas and Pine Bluff, Arkansas. Later, his family moved to Long Island, New York where he met his first wife Elthera Singleton and was married for 20 years. Then his parents relocated to Utica, New York. William moved to Utica to be close to his parents. This is where William met and married his current and beloved wife Erin Cain - Carter. His relationship and marriage with his wife spanned THIRTY strong years. He was a loving Father of seventeen children But his greatest joy was keeping his family close. He was an affectionate ‘Grandpa’ and ‘Poppop’, as his grandchildren called him. His children and grandchildren always put a sparkle in his eyes. His ambition was to stay in contact with all of his children. William is survived by his wife Erin and their children LD, and Kevin; his former wife, Elthera, and their children, William Jr, Chappell, Sedonia, Leslie, Clara Mae, and Lemans. Cora (Toot) her children Monique and Quiana; Sheila and her children James and Ciecie. He had a host of grandchildren and great-grandchildren. He also leaves his siblings, Eloise Carter, LD Carter (Pat), Bernice Chestnut, Kenny Carter, Ray Charles Carter (Keeba), Dale Carter (Leslie) and Josephine Carter. He was an uncle to many nieces, nephews, great-nieces, great-nephews, and he also leaves his cousins and in-laws, Nancy Cain and Don, John and Lisa Cain; (Robert and Bridget) as well as his friends Joe and Maria from New Jersey. He was predeceased by his siblings, Ivory Carter, J.W. Carter, Jacqueline Williams, Tom Smith, Joe Dabney, and CL Dabney. He is also was predeceased by his father-in-law Jack Cain. William was a free spirit with love and a sense of responsibility in his heart. When he was younger, he taught glass painting and was a manager at a Youth Recreation Center in Roosevelt New York. In Utica, He bought a broken-down house and rebuilt it and made it home for him and his family. He became an entrepreneur by renting an apartment in his home that he designed and built. While living in Utica in his later years, he worked at the Radisson and Holiday Inn Hotel. This is where the love for Erin his wife began. He eventually retired because of his health. William liked things done his way. He was an Alpha male and the master of the kitchen and grill. He was the one who made the meals. He respected and carried out his responsibility, and he spoke truth to power when finding real resolutions to problems rather than quick fixes. His word was his word and he asked the same of others. He was the patriarch and big brother of his family, and he commanded respect. He offered his help and was always there for those he loved. He had faith and firmly believed in God. His mom was the strongest woman in his world. He proudly followed in her ideas and values. His children knew his love of Christ. This was shown through his actions. The family knew what he went through and how his life changed through the challenges he faced in life. He found peace and was a more tender soul for it. He is and will always be missed. Joshua 1:9 “I have commanded you, ‘Be strong and courageous! Don’t tremble or be terrified, because the Lord your God is with you wherever you go” Joshua 1:9 Know that William Carter, Sr., “Slick; is with God; because God keeps his promise! The family extends their thanks to the staff of MVHS at St. Luke’s ICU, especially Nurse Kelly who was so compassionate; and many physicians, especially Dr. Fred Talarico, and Pat Rosati/NP who were so special and kind.

The family of Mr. William "Slick" Carter, Sr. created this Life Tributes page to make it easy to share your memories.