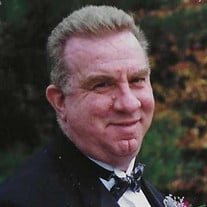 UTICA - Mr. William D. “Bill” LaFluer, age 72, was reunited with his wife when he passed away on Tuesday, September 15, 2020, with his daughters by his side. Born in Syracuse on October 7, 1947, William was the son of the late Wilson D. & Geraldine (Schmigel) LaFluer. He was a graduate of Henninger High School. In 1965 he relocated to Utica, and on April 15, 1967 he married the former Camille A. Fanelli with whom he shared 41 years as her constant companion, and as quoted, “he was the wind beneath her wings”. Camille passed away on December 27, 2008. After they were married, later in 1967, Bill enlisted in the United States Navy where he served his country with honor during the Vietnam Era stationed on the carrier/repair ship USS Amphion. A proud veteran, he was the recipient of the National Defense Medal 1st Award, Vietnam Service Medal, and the Vietnam Campaign Medal. In the years that followed, being the true patriot that he was, Bill continued serving his country as an Army Reservist and was a member of the Military Police, attaining the rank of Major upon his retirement from service. Bill’s main employment was at the US Materials Handling Corporation where he worked in various capacities and displayed his dedication and diligence. As his responsibilities grew, Bill became one of the only ‘non-owners’ appointed to a management position, retiring in 2013. Although Bill was a reserved soul, he was a man of great emotion. An outdoorsman, he enjoyed hunting, especially in the Southern Tier, camping, and day trips with the entire family to Verona Beach State Park, and Delta Lake State Park. As a dad, he was supportive of his daughters’ endeavors and accomplishments. As the grandchildren came, they trumped his girls for his attention, and he loved spending time with them. Precious memories were made “for the boys” who had the privilege of living with their pop. He had unique nicknames for his grandchildren and they loved that individual special attention. Holiday gatherings with festive meals were an annual event, but Bill’s favorite food fare included steak-and-potatoes, pasta (especially lasagna), and “liver and onions” prepared only by his wife! Bill was an avid golfer, a fan of NCAA March Madness, and football in general, topped off with a yearly Super Bowl bet with “an old war buddy” who he always kept in touch. When his wife was involved with the Sons of Italy, he supported all her involvement and charitable endeavors. They also participated in Sunday Night Couples’ Bowling at the Vista Lanes. When raising his family their home parish was St. Anthony & St. Agnes Church. Bill is survived by his beloved daughters and sons-in-law, Rene and Ed Wright Jr., and Lisa and Damon Lewis; his grandchildren, Megan Wright, Edward William Wright; Vincent Turturo, Andrea Maltais, Anthony Turturo, and twins Rebecca and Isabella Lewis. Also, Daniel Coleman was blessed to know Bill as a grandson would. Daniel and Bill’s grandson Anthony lived and cared for one another, and “Pop” provided a roof over their heads and food on the table, …and the boys took care of the rest. He also leaves his brother and sister-in-law, Philip and Priscilla LaFluer; many nieces, nephews, great-nieces, great-nephews, cousins; sisters-in-law, Joan Mancuso, and Shirley Mario; his daughters’ in-laws, Edward Sr. and Roseanne Wright, and Robert and June Lewis, all of whom were a part of life for Bill and Camille and their family; and friends who preceded Bill, Maryann and Dick Phillips, friends to the end, and sorely missed. He was predeceased by his brothers-in-law, Anthony M. Fanelli Jr., and Robert P. “Bob” Mario; and his cousin, Rodger Jablonski, who was like a brother. The family is grateful to ICU nurse Shelly at MVHS at St. Luke’s Health Care for her compassion and empathy during Bill’s last moments. Visitation will be held Sunday afternoon from 2:00-3:00 at the Eannace Funeral Home, Inc., 932 South St., corner of Hammond Ave. Due to current restrictions, we will be operating at a limited occupancy. We ask for your patience as we try to accommodate those coming to support the LaFluer family. Face masks must be worn and contract tracing will be implemented. Interment will take place in St. Agnes Cemetery at the convenience of the family. Please take a moment to connect with Bill’s family through the “Memories” section of his obituary. Our prayers go out to all as a sign of our continued support.

The family of Mr. William D. "Bill" LaFluer created this Life Tributes page to make it easy to share your memories.

Send flowers to the LaFluer family.