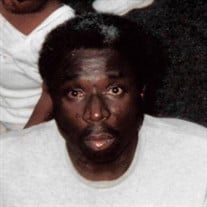 UTICA – Wayne C. Wright, age 64, was born in New York, NY on June 9, 1957, to Arthur L. Wright, Sr. and Janie I. “Nell” Jamison; and was raised by his grandmother Janie White-Simmons (who has preceded him), along with his parents. After a long health battle Wayne “Jah Jah” went home to be with the Lord on Sunday, March 6, 2022 in the comfort of the Abraham House in Utica. Wayne fought a good fight, he has finished his course, he has kept the faith. He received his education at Roosevelt High School in the Bronx, NY. His vast drumming career started when he appeared in the iconic Apollo Theater in NYC, he began performing with many notable bands which included the late Billy Paul. Wayne had over 40 first cousins who he grew up with as sisters and brothers – and because of this that, Wayne harbored a deep appreciation for family. Wayne “Jah Jah” would later relocate to Utica, NY in 1993, to his Uncle John and Aunt Estell home, in order to help provide care for his Aunt Estell, after her illness. Wayne enjoyed a diverse working career, including a role as an Assembler at Human Technologies Corporation (where he met Ramona). He was also employed with the City of Utica Parks and Recreation Department until his illness. Wayne and Ramona met at HTC and spent the next 21 years inseparable, building a family and relationships that they both were happy and proud of, raising her children and grandchildren as his own. Ramona gave him the opportunity to fulfill his desire to be a parent and grandparent, as he loved all children as he demonstrated with hers, and all the children in his family with protection, guidance and love. He became the family’s unofficial “cab driver”, making himself available to anyone that needed him. He watched over his multiple cousins from childhood to young adulthood exposing them to many different recreation events, and becoming quite the “Pied Piper,” giving out treats galore. Jah Jah made many outdoor family gatherings events to remember with his loud music, famous potato salad and at recent gatherings he led the conga line with his scooter, he loved to dance. Wayne was a wonderful man with numerous skills and virtues. Those who knew him say one of his greatest attributes was his not focusing on the past, his ability to inspire others to see no limitations, and to live life to the fullest and doing what you can while you can. It was a blessing that he was able to keep all the people in his life close to his heart, showing a remarkable capacity for concern and parental love. Wayne is survived by his mother, Janie "Nell"; his father, Arthur Sr. (Frances); his long-time partner, Ramona Barrett; and the children they raised together: son, Ibn Khalif; daughters, Faliscite Rivera, and Rebecca Barrett Spratt; grandchildren, Xavier Powells, Trenton Robinson, Surai Rivera; and Diamond, Diamilliyon, Princess, D'Amani, D'lmari and D'Emilia Barrett. Wayne also leaves his siblings who mourn the loss of their big brother whom they looked up to, James "Jimmy" (Annamae) of GA, Judith "Judy" of NY, Arthur Jr. "June Bug” (Jennifer), and Laramie of VA, Wanda and Nathaniel of NJ, and Tina and Judah of DE. He also leave his aunts and uncles, including Everlena “Lena” (AL) Calistro, Theora Pressley, Gloria Simmons, Janie Daniels, Ellis Wright, Alexine Brown (Henry), Johnnie Wright (Jerlene), Barbara Frazier, Sinclair Wright (Geneva), Patricia Alston (Herman), and Verna Blake; and his 104 year old great-aunt, Beatrice Lee. He will also be lovingly remembered by his nieces, including Asia Cooper, Ayesha, Naomi, Ashley, Natasha, Britney, Akira, Quiana, Alana, and Kailan; nephews, including Bekeri Bousso, James, Nate, Maceo, Kelly, Judah, and Julian; great-nieces, great-nephews, and a plethora of cousins including Devana ’Ogarro whom he entrusted with assisting with his final arrangements; along with his loyal friends. Wayne gave advice, schooled countless, and will be missed by so many. He loved people and especially appreciated the relationship he and Ramona shared with his Uncle John “Kochie” Robinson, who awaits him in Heaven to begin where they left off. The duo will be renewed with new spiritual bodies and no more pains. The family would like to extend a special thank you to Dr. Sikder; the staff on the 6th floor at MVHS at St. Luke’s Healthcare; Hospice and Palliative Care, Inc.; and the welcoming staff and volunteers at the Abraham House in Utica, where Wayne appreciated the homelike environment, and both Wayne and his family were welcomed and allowed many visitors, he was comfortable in their care. Visitation will be held on Saturday, March 19, 2022 from 3:00-5:00 at the Eannace Funeral Home, Inc., 932 South Street, corner of Hammond Avenue. Wayne’s Homecoming Service will commence at 5:00 at the conclusion of visitation.

The family of Mr. Wayne C. "Jah Jah" Wright created this Life Tributes page to make it easy to share your memories.

Send flowers to the Wright family.