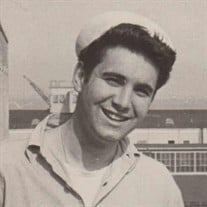 NEW HARTFORD – Mr. Walter F. Raymond, Sr., age 89, passed away on Monday, January 17, 2022, in the comfort and dignity of his own home with his loving family by his side. Born in Ilion, NY, on August 31, 1932 to the late Walter and Mildred (Rooney) Raymond, Walter was educated in Utica-area schools. After his academic pursuits, Walter joined the U.S. Navy and participated in the Korean Conflict; he was always proud of being a veteran. Walter lived by the motto “God, family, country,” and was a true patriot and an even more dedicated family man. On October 25, 1952, Walter married the love of his life: the former Helen Horton, who tragically passed on November 24, 2007. The couple shared an exceptional closeness throughout their marriage – they were the definition of soulmates – and Walter held Helen’s memory close to his heart until their recent reuniting. Family was everything to Walter, which he showed with his constant selflessness. Furthermore, Walter adored his children; when the grandkids and the great-grandkids arrived on the scene, his heart expanded to include boundless love for them. Walter’s professional life was devoted to New York Telephone Co., where he held a position as a Telephone Service Technician until his retirement. Whether he was at work or with family and friends, others found Walter to be a laid-back man and easy to get along with. He was known for kicking back and enjoying a laugh with family and friends; those who knew Walter remember his fantastic sense of humor. When he wasn’t working or spending time with his beloved wife, Walter could be found enjoying his trains and his prized antique toy collection. Walter and Helen especially enjoyed spending time with Golden Glow of Christmas Past, an annual convention hosted by members located all over the country. It was a place where the couple could share their passion for Christmas traditions with other like-minded people, and it offered Walter a network of other antique Christmas toy collectors. A faith-filled man, Walter believed in the Catholic Creed and was a member of the Secular Order of Franciscans. Additionally, Walter was a parishioner at St. Joseph & St. Patrick Church. Walter is survived by his cherished daughters and their spouses, Ruth and Thomas Kimball, Elaine and Philip Alamond, Denise and Mark Gribanoff; and his son, Walter F. Jr., and wife Diana Raymond. Walter will be missed by his treasured grandchildren, Michael Kimball, Andrew Kimball; Jeannine and Angel Cotto; David and Michelle Alamond; he was preceded by his grandson, Mark Walter Alamond; and leaves behind Amanda and Shawn Fohs; Sara Gribanoff and fiancé Jack Scherer; Derek and Kelly Raymond, and Keith and Toni Raymond. Walter will be held in the hearts of his great-grandchildren, Gabriel, Aiden, Ariana; Kyle, Jackson, and Harper; Olivia, and Ava; Thomas; Finn, and Levi; and his sister, Joan Varin. He will be remembered by his nieces, nephews, grand-nieces, grand-nephews and cousins. Walter was predeceased by his brother, Donald Raymond. Visitation will be held on Monday morning, January 24, 2022 from 9:30-10:30 at St. Joseph and St. Patrick Church, 702 Columbia Street. In lieu of flowers, the Raymond family gratefully accepts donations made in Walter’s honor to the Wounded Warriors Project, online at https://support.woundedwarriorproject.org; or a Mass offering made in Walter’s memory. Relatives and friends are respectfully invited to attend Walter’s Mass of Christian Burial and Celebration of Life with Military Honors on Monday at 11:00 at St. Joseph and St. Patrick Church. Regardless of vaccination status, face masks are required to remain in compliance with the state and county mask order.

The family of Mr. Walter F. Raymond, Sr. created this Life Tributes page to make it easy to share your memories.