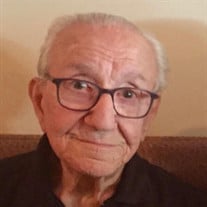 NEW HARTFORD – Mr. Vincent “Jim” Salerno passed away peacefully at age 102 on Sunday, February 27, 2022 with his family at his side. At the time, he was a resident of the Sitrin Health Care Center in New Hartford. Jim was born in Utica on June 22, 1919, the youngest son of the late Joseph and Catherine (Tantillo) Salerno. Following his graduation from Utica Free Academy (Class of 1939), he began working at Utica Drop Forge’s Tool and Die Department. At the start of World War II, he enlisted in the United States Army Air Force and served stateside and in India. He was honorably discharged in 1946 from the 323rd Air Service Squadron as a Master Sergeant in the field of Bombsight and Autopilot Specialist and then returned to Utica. He remained a member of the American Legion Fort Schuyler Post for the rest of his life. On October 16, 1946 he married Rose F. Vassallo. They had a devoted and happy marriage, lasting 62 years until Rose’s passing on June 20, 2009. God blessed their marriage with two devoted children, Catherine Romano and Joseph Salerno. Together with his three brothers, John, Phil and Tony, he owned and operated Salerno’s Food Market on Blandina Street. He later owned and operated Super Value Foods on the corner of Eagle Street and Seymour Avenue, with the help of his wife and children. After selling his business, he went to work for Smith Packing Company where he was a highly regarded employee for over 35 years and was always treated as family by Wesley, Mark and Eric Smith. Surviving are his daughter and husband, Catherine and Ronald Romano of Ogdensburg, NY; son and husband, Joseph Salerno and Alan Urek of Philadelphia, PA; granddaughter, Susan Romano of Clifton Park, NY, grandson and wife, Ronald and Brandi Romano of Canton, NY; and two great-grandchildren, Nathaniel Vincent and Alexa Rose Romano. He is also survived by his favorite nephew, Rev. Joseph Salerno of Utica; nieces, Joanne (Greg) Jamrosz of New Hartford, Angela Pardi of Utica, and Barbara Salerno of Panama City, FL; and nephews, Richard (Suwan) Vassallo of Sacramento, CA, and Anthony Constabile of Utica. In addition to his immediate family, Jim was blessed with a large circle of devoted friends who always looked out for him in his later years. Especially after the passing of his wife, they served as extended family members and helped him to live the very independent life he cherished well past the age of 99. His children express their sincere appreciation to his workmates at Smith Packing; his bar buddies at Paul’s Pub, especially Butch, Paul, and Lucille; his former neighbors and helpers at the Wedgewood Apartments; the friends he retained from his days living in East Utica, Corn Hill and Sauquoit; and the many others who’ve been there for him. Special thanks go to Judy Butler for her devotion and extra efforts over the past several months. The family also expresses its gratitude to the staff at Cedarbrook Village, and in particular, Amanda Beyer for making Jim feel so at home during the 2 ½ years he lived there. Relatives and friends are respectfully invited to attend Jim’s Mass of Christian Burial with Military Honors conferred which will take place at Mary, Mother of Our Savior Parish (Our Lady of Lourdes Campus) on Monday, March 7, 2022 at 10:00 am with his nephew, Rev. Joseph Salerno officiating. The family will receive visitors at the conclusion of Mass. In lieu of floral offerings, if you wish to honor Jim’s memory, consider a donation to the charity of your choosing or – like him – simply show tolerance and kindness to all the people you encounter in everyday life. The tribute was lovingly composed by Jim’s family.

The family of Mr. Vincent "Jim" Salerno created this Life Tributes page to make it easy to share your memories.