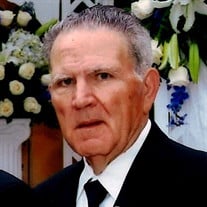 NEW HARTFORD -Vincent “Vinny” Calautti, Sr., age 76, peacefully went home to the Lord when he passed away on Friday, August 21, 2020 at the Sitrin Health Care Center/Magnolia House after a courageous battle with Parkinson’s Disease. Born in Calabria, Italy on June 1, 1944, Vincent was the son of the late Domenico and Anna Maria (Nigro) Calautti. As a young child, he and his family came to America and settled in Brooklyn where he knew the love and guidance of his Aunt Maria and Uncle John Tavernese. At the age of 18, he established a Pizzeria in Brooklyn, a venture of which he was so proud; and that is where his love of the culinary arts began. At one time, he was married to the former Nancy Albanese and to that relationship came the blessing of three children. They respected their role as parents, and in 1972, Vinny relocated his family to be closer to his wife’s family. They remained constant friends to his last day. Vinny began his venture into the restaurant business with Fred Grimaldi at Alfredo’s. Through that association he launched the Coliseum Restaurant, which was formerly The Diplomat in North Utica. In 1981, he and his wife opened Vincent’s Restaurant on Seneca Turnpike-- a family affair known for its fine dining. Through his determination and business acumen Vinny proved to be successful with Nancy by his side. Having grown up in the restaurant their three children followed in Vinny’s footsteps, carrying on their parent’s legacy. A loving patriarch, Vinny was a hard worker and a good provider. He embraced every opportunity to make a good living and support his family. He was an incredible grandfather who supported his grandkids in so many ways. He was blessed with a son-in-law and a daughter-in-law whom he admired, and whom admired him. He had a number of nieces and nephews, along with great-nieces and great-nephews that he cherished, and he shared a special bond with his niece Rosella. These collective bundles of joy were a true gift. Vinny’s hobbies were games of chance with the ponies, playing cards, and visiting the casino. Vincent is survived by his daughter and son-in-law, Mary Lynn and Michael Paniccia; two sons and his daughter-in-law, Vincent “Vinny” Jr. and Adriana Calautti, Dominick Calautti; and their mother, Nancy; his cherished grandchildren, Gianna, and Genaro Paniccia; Julianna, and Celina Calautti; step-mother, Marianna Calautti; and sisters and brothers-in-law, Immacolata “May” Mazzaferro, Maria and Cosmo Mazzaferro, Rosa and Domenico Cataldo, Silvina Calautti, Theresa and Pasquale “Pat” Ianno, and Frank and Pattie Albanese. He also leaves his nieces, nephews, great-nieces, great-nephews, cousins, and the many loyal friends who blessed his life. He was predeceased by his brother, George Calautti; beloved cousin Vinny Tavernese; brother-in-law, Salvatore Mazzaferro; in-laws, Natalina and Domenico Albanese; and his beloved nephew, Joseph Ianno. As a consequence of the COVID pandemic and unavailability of his loved ones to be together at this sacred time, a Memorial Mass of Christian Burial will be held at a date and time when we are all able to gather again. Due to the delay of services, the family would greatly appreciate omission of floral offerings. Expressions of sympathy in the form donations may be made to the Sitrin Health Care Center/Magnolia House for the outstanding ways in which they cared for Vinny during his time there. The staff was always gentle, kind, and compassionate in their love for Vinny. Their donation link can be found online at https://www.sitrin.com or by mail to PO Box 1000, New Hartford, NY 13413-1000. Please take a moment to connect with Vincent’s family through the “Memories” section of his obituary. Our prayers go out to all as a sign of our continued support.

The family of Mr. Vincent "Vinny" Calautti, Sr. created this Life Tributes page to make it easy to share your memories.

Send flowers to the Calautti family.