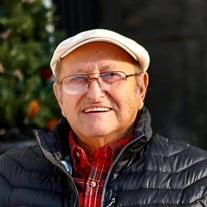 SAUQUOIT- Mr. Victor Leon DeStefano, Jr., age 85, went to heaven and was reunited with his mother, father, brothers, wife, and son when he passed away on Saturday, January 16, 2021 after living a great life. Born in Utica on March 9, 1935,... View Obituary & Service Information

The family of Mr. Victor Leon DeStefano Jr. created this Life Tributes page to make it easy to share your memories.

Send flowers to the DeStefano family.