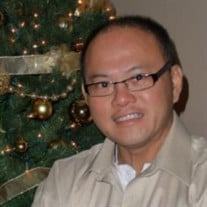 WHITESBORO - Mr. Thomas Torres “Tito” Referente, age 65, went home to heaven after a courageous battle on Tuesday, December 1, 2020. Born in Basilan, Philippines on March 6, 1955, Thomas was the son of the late Tee Tang and Thomasa Referente. Raised and educated in the Philippines, he earned a Bachelor of Science degree in Medical Technology. In 1978 he began working in Saudi Arabia as a Medical Technologist, a position in his field that he held for 18 years. On June 1, 1985 he married the former Maria Nerisa Eribal. They were a happy couple who loved to travel together. Their family life was guided by the traditions of fostering respect, extending hospitality, doing things together, helping people, and loving each other and their elders. Tito wanted to make a better life, and in 1999 he and his family immigrated to Canada where they resided for five years. In 2004, they came to Utica, and called it home. Thomas was employed at CML Healthcare and Trillium Health Partners as a Medical Technologist prior to immigrating to the United States where he was hired as a Lab Technologist Supervisor at MVHS at St. Elizabeth Medical Center until his retirement in 2015. Tito had an outgoing personality. He was very inclusive and incorporated people into his life. He was a dependable man to many, and he loved his family unconditionally. His needs were sacrificed for the wellbeing of his loved ones. In essence, he was a gentle soul, thoughtful in demeanor and benevolent in actions. His work ethic was impeccable and his proclivity for numbers was precise. His wisdom and mathematical acuity were fine examples for his family. He was a jack-of-all-trades and tried to master them all because he loved to challenge his mind and his physical abilities. He loved to cook and bake, a talent inherited from his father who was Chinese and very cultured in cooking the cuisine of his homeland. Tito, in turn, made an overabundance of delicious meals that he graciously shared with friends. Christmas and Thanksgiving were high holidays, and Tito’s cooking was the focal point and success of these gatherings. His patience was his best virtue, and the blessing of his wonderful children and their impressive accomplishments brought him joy, just as his grandchildren brought him great excitement! Tito enjoyed many genres of music and he owned a piano. He took lessons on this instrument as a method to mitigate and slow the progression of his Parkinson’s disease and increase his motor skills and mental coordination. A parishioner of St. John the Evangelist Church, Thomas attended Mass and sang throughout the liturgy. He was close to God and put his trust in His divinity. Thomas is survived by his wife, Maria Nerisa; his daughters and their loved ones, Sheenashe “Sheena” (Eric) Brandenburg, Shanelle (Justin) Castaneda, and Sidney (Dorothy Joy) Referente; his grandchildren, Logan Henry Brandenburg, Zoe Finn Brandenburg; Isla Rae Castaneda; and Raylan Cole Referente; his sisters, Pilar Referente, Sonia (Rolly) Enriquez; and his late brother, Ricardo (Daisy) Referente. He also leaves his twin nephews Soi and Pinoy who he treated like his own sons, nieces, nephews, great-nieces, great-nephews, cousins; in-laws, Winifredo (Nellie) Eribal, Fechita Eribal, Maria Charito Eribal, Romeo Eribal, Leopoldo Jr. (Gudelia) Eribal, and Mercedita Eribal. Tito leaves a group of close friends who have become family. The “Barangay Utica” would gather for their monthly rosary prayers, birthdays and other special occasions. He enjoyed singing karaoke during the family gatherings and he especially loved the annual Christmas parties. They were always there for him and his family offering prayers and support. He also leaves his best friend, James Piperata, with whom Tito spent many good times together, and James was just as dependable as Tito; they were “Thick as Thieves”. In addition, Tito inherited a dog who he wasn’t quite sure he would come to love as much as he did, and “Tila” will miss him very much. He also had a feline that he rescued named Gossamer who preceded him this past year. The family is grateful to Dr. Charles Eldredge, Dr. Paul Davidson, Dr. Lev Goldiner, Dr. Jason Costa, Helen Dolan NP, Dr. Joyce, Dr. El-Amir, Dr. Shwe Win, Dr. Affaf Munir and Christina Fearon NP. All these wonderful medical professionals were so sensitive and communicative regarding Tito’s updates and condition. Thanks also to the Upstate Transplant Team, and the kidney donor who gave Tito 3 years of life. The nurses and aides of the MVHS @ St. Elizabeth Medical Center were outstanding and the family is so grateful for their love and friendship. Appreciation is extended to Brianna Sangiacomo, Shanelle’s best friend, who checked up on Tito during the numerous times he was admitted to the care of the hospital. She was a familiar face that gave him comfort during trying times. The family will honor and commemorate Thomas’ life at a private time. In lieu of flowers, memorial contributions in Tito’s memory may be made to the American Diabetes Association, https://www.diabetes.org/donate/donate-memorial. During this time of social distancing that we are all experiencing, please take a moment to connect with Tito’s family through the “Memories” section of his obituary. Our prayers go out to all as a sign of our continued support.

The family of Mr. Thomas Torres “Tito” Referente created this Life Tributes page to make it easy to share your memories.

Send flowers to the Referente family.