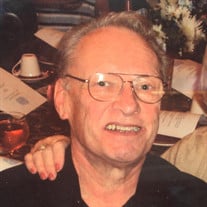 UTICA - Mr. Thomas R. Rastani, age 77, passed away on Monday, April 26, 2021 after a long illness. At the time of his passing he was in the hearts of those he loved the most. Born in Utica on September 28, 1943, Thomas was the son of the late Louis E. and Annette (DeGeorge) Rastani. On September 28, 1963 he married the former Jean M. Napoli. A loving couple, they were compatible and kind to one another during their 57 years together. Tom worked as a Route Salesman beginning at Abelove’s Laundry and later transitioning to Tartan Textiles, serving his clients for over 41 years, until his retirement. Because he needed to stay busy, he continued in the workforce as a part-time driver at Centrex which later converted to LabCorp. Tom was a pleasant, sociable man, skilled in many areas. He was meticulous in maintaining his home and everything had to be just so. As a father, he was a fair-minded parent and provider to his children. He was a NASCAR Racing fan, viewing it on tv and attending numerous races. Hunting was his sport of choice for downtime in the tranquility of the woods. Tom was proud of the life he lived, the relationship he revered with his wife, and God’s gift of children who loved their dad. As a Christian, Tom took to heart the teachings of the Lord. Tom is survived by his devoted wife, Jean; his son and daughter-in-law, Mark T. and Marie Rastani; daughter and son-in-law, Lisa and Kurt Dellers; grandchildren, Ashley and Rich Grimaldi, Jennifer Rastani; Kate Dellers, Kara Dellers, and Kyle Dellers; and his great-grandson, Marco Grimaldi. He also leaves many cousins, close friends, and wonderful neighbors. He was predeceased by his father-in-law and mother-in-law, Attilio T. “Terry” and Josephine M. Napoli; and in-laws, Terrence S. Napoli, and Antoinette M. Napoli. The family is grateful to the personnel of Guthrie Robert Packer Hospital and the outstanding staff of professionals of the ICU for their compassionate care. The family will honor and commemorate Tom’s life at a private time. Interment in Calvary Cemetery will take place at the convenience of the family. During this time of social distancing that we are all experiencing, please take a moment to connect with Tom’s family through the “Memories” section of his obituary. Our prayers go out to all as a sign of our continued support.

UTICA - Mr. Thomas R. Rastani, age 77, passed away on Monday, April 26, 2021 after a long illness. At the time of his passing he was in the hearts of those he loved the most. Born in Utica on September 28, 1943, Thomas was the son of the late... View Obituary & Service Information

The family of Mr. Thomas R. Rastani created this Life Tributes page to make it easy to share your memories.

Send flowers to the Rastani family.