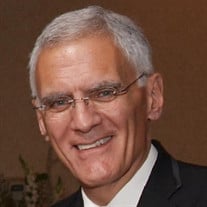 NEW HARTFORD – Mr. Steven A. Tehan, age 69, passed away after a courageous battle with lymphoma on Tuesday, February 8, 2022, in the comfort and dignity of his home with his loving family by his side. ​A native Utican, Steven was born to the late Louis Basil and Victoria Tehan. He was raised locally, graduated from Notre Dame High School, and earned his Bachelor of Science Degree from Le Moyne College. Steven was Co-Owner of Tehan’s Plaza in New Hartford, and Former Vice President and Director of Operations at Tehan’s Catalog Showroom and the Only $1 Dollar Stores. ​Steven was blessed to marry the former Kathleen Halbig, his wife of forty-five years. The couple had two daughters together. ​A sports enthusiast, Steven was a basketball referee for twenty years. He made many lasting friendships there and loved his time officiating. Moreover, Steven loved all sports and was especially devoted to his family’s fantasy football league. ​Steven believed the Catholic Creed and was a parishioner at St. Basil’s Greek Melkite Catholic Church. ​Steven is survived by his beloved wife, Kathleen; and his cherished daughters and sons-in-law, Christine and Jesi Personett, and Laura and Shawn Walters. He will be missed by his grandchildren, Alana Personett, and Ashley Walters; his brother and sister-in-law, Richard J. and Joanne Tehan, and his sister and brother-in-law, Marianne and Seth Gordon. Steven was predeceased by his brothers and sister-in-law, Dr. Basil L. and Bertha Tehan, and Robert J. Tehan. He was also predeceased by his brother, Dr. Frederick J. Tehan and is survived by Frederick’s wife, Kathleen R. Tehan. Steven leaves behind his nieces and nephews, Victoria Keil, Louis Tehan, Elizabeth Cornell, Joseph Tehan, Patricia Tehan Tosuner, Michael Tehan, Richard M. Tehan, Kara Tehan, Jessica Tehan, Richard W. Tehan, Sean Gordon, Jacob Gordon, Meg Schiemann, Sarah Reilly, Daniel Halbig, Kate Underhill, Melissa Curley, Todd Halbig, Jodi Halbig, Nikki Stewart, Meridee Sadowitz, Caitlin Halbig, Casey Robertson, and Jack Conboy. Steven will live on in the hearts of his mother-in-law, Dolores Halbig; and his brothers-in-law and sisters-in-law, Robert Halbig, MD and wife Kathleen, Edward Halbig and Tina D’Amico, Thomas and Laura Halbig, and Patricia Conboy. Steven additionally leaves behind his godchildren, Michael DeAngelo, Kara Tehan, and Michael Tehan; as well as his lifelong friend, Joseph Burke. Steven was also predeceased by his father-in-law, Edward Halbig; and his sister-in-law, Anne Halbig. ​The Tehan Family would like to extend their gratitude to their amazing family, friends, the doctors, the nurses, and the staff at Hospice and Palliative Care for their care and compassion throughout Steven’s illness. ​Relatives and friends are respectfully invited to attend Steven’s Mass of Christian Burial which will commence on Saturday morning, February 19, 2022 at 11:00 at St. Basil’s Greek Melkite Catholic Church, 901 Sherman Drive. The family will receive visitors at the conclusion of the Mass. In lieu of flowers, please consider memorial contributions made in Steven’s honor to St. Jude Children’s Research Hospital, online at https://www.stjude.org/donate; to the V Foundation for Cancer Research, online at https://www.v.org/donate; or to a charity of your choosing. Envelopes will be available at the service. Entombment will take place in Calvary Mausoleum at Calvary Cemetery at the convenience of the family.

NEW HARTFORD &#8211; Mr. Steven A. Tehan, age 69, passed away after a courageous battle with lymphoma on Tuesday, February 8, 2022, in the comfort and dignity of his home with his loving family by his side. &#8203;A native Utican, Steven was... View Obituary & Service Information

The family of Mr. Steven A. Tehan created this Life Tributes page to make it easy to share your memories.

Send flowers to the Tehan family.