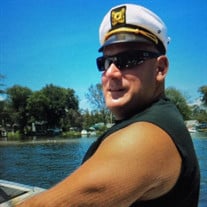 MARCY - Mr. Stephen M. “Steve” Coppola, age 55, passed away on Friday, October 16, 2020 after a valiant battle with cancer. His passing occurred in accordance with his wish to be in the comfort of his home with his fiancée Deana by his side. Born in Syracuse on February 14, 1965, Stephen was the son of the late Philip J. and Dorothy A. (Kelly) Coppola. He was a graduate of Whitesboro High School/Class of 1984. Steve shared in a 6-year relationship with his fiancée Deana Verrenti, the most important person in his life. His exuberant nature led to many wonderful times, and Deana reciprocated by giving Steve a life of peace and serenity. Theirs was a loving relationship. They journeyed together through his illness with optimism. She was his best advocate and took superb care of him. A valued, steadfast worker, Steve was employed by the Oneida County Sheriff’s Department, and subsequently accepted a position at the Central New York Psychiatric Center as a NY State Correctional Officer. He carried out the responsibilities of his profession with integrity and equity, serving in the capacity of a law enforcement officer for over 23 years, retiring due to his illness. An engaging, energetic man, Steve worked hard to acquire his home, and he treasured it. He was a perfectionist not only in maintaining his house, but also in meticulously mowing the lawn. His swimming pool was a particularly great addition to his homestead and a place where he relaxed and entertained friends. He made a trip to the gym on a daily basis to work out and challenge his physical endurance and mental stamina; the highlight of his day was to meet up with his buddies and socialize. With a smile on his face, Steve was a happy, helpful, hospitable soul and the life of the party. He loved the sun, the ocean, and visiting St. Pete’s where his dad had once resided, but it was the city of Clearwater that caught his eye. Steve also had a passion for boating on the waters of area lakes and the Thousand Islands. And, he loved to eat! He had a preference for Italian food, and it was easy for him to put away a pound of pasta. Tuesday nights were spent at Pellitteri Joe’s. He definitely enjoyed dining out! When it came to sports, he was a Dallas Cowboys fan. He was blessed with the love and respect of Deana’s family and he was so thankful for the love and support they gave to him. A recent communicant of Historic Old St. John’s Church, Steve was prayerful, and mindful, and when physically able, he attended weekly Mass on Saturday at 4:00 p.m. He leaned on the Lord during his illness, and humbly participated in healing Masses celebrated by Fr. Amadeo Guida. He thought of other people before himself. He truly was a “gentle giant.” In retrospect, Steve had a will to win, and he fought for the things he wanted. He worked diligently, and gave so much of himself to accomplish what he desired, …with strength, hope, and confidence. Steve is survived by his devoted fiancée Deana (DelMonte) Verrenti; his son, Joseph “Joey” Carlomusto; sisters, Donna M. Aumiller, and Lori (Joe) White. He also leaves his aunts and uncles; nieces, Danielle Aumiller, and Gianna Giglio; and nephew, Vincenzo Giglio. In addition, he leaves his fiancée’s family, Pomp and Anne Marie (Centola) DelMonte, Laurie and Frank Giglio, John DelMonte; and his incredibly devoted friends and co-workers who were an important part of his life. He was predeceased by his paternal grandparents, Anthony and Anna Coppola; maternal grandparents, John and Agnes Kelly; and brother-in-law, Ryan Aumiller. Deana is grateful to Dr. Alicia DeTraglia, the 6th Floor Oncology Unit at MVHS at St. Luke’s Health Care Center, all of whom provided tremendous care to Steve, and offered emotional support to Deana during the trying summer of care; and the personnel of Hospice & Palliative Care for their gentle, compassionate vigilance and availability. Relatives and friends are respectfully invited to attend Steve’s funeral service and Celebration of Life which will commence on Friday morning at 9:30 at Historic Old St. John’s Church where his Mass of Christian Burial will be offered. Social distancing, registration for contact tracing, and a mask covering your nose and mouth will be required. Memorial contributions in Steve’s memory may be considered to Hospice & Palliative Care, Inc. online at https://hospicecareinc.org/donate-online/ or to the American Cancer Society online at https://donate3.cancer.org/; envelopes will also be available at the service. During this time of social distancing that we are all experiencing, please take a moment to connect with Steve’s family through the “Memories” section of his obituary. Our prayers go out to all as a sign of our continued support.

MARCY - Mr. Stephen M. &#8220;Steve&#8221; Coppola, age 55, passed away on Friday, October 16, 2020 after a valiant battle with cancer. His passing occurred in accordance with his wish to be in the comfort of his home with his fiancée Deana... View Obituary & Service Information

The family of Mr. Stephen M. "Steve" Coppola created this Life Tributes page to make it easy to share your memories.

Send flowers to the Coppola family.