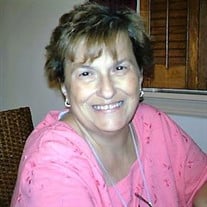 UTICA - Mrs. Shirley A. (Fanelli) Vivenzo Mario, age 74, was reunited with her husband on Wednesday, September 1, 2021 when The Lord called her home. At the time of her passing, those she loved most were in her heart. ​Born in Utica on September 18, 1946, Shirley was the daughter of the late Anthony and Antoinette (Giglio) Fanelli. She attended Brandegee Elementary School and graduated from T.R. Proctor High School/Class of 1964. A cherished moment came to Shirley’s life when she married Philip F. Vivenzo, Jr. in 1967. They were blessed with 3 children, and sadly, Phil’s untimely passing in 1973 left Shirley as a single mom. On July 4, 1980, Shirley wed Robert P. “Bob” Mario and the joining of their hearts and family was exceptional and filled with love. This wonderful union lasted until Bob’s passing on April 25, 2004. ​In her younger years Shirley held a position as a Telephone Operator for the New York Telephone Company. Shirley’s main priority was raising her family. As her children grew older, she was employed at Excellus Blue Cross Blue Shield. Seasonally, she enjoyed working the Coat Room at Alfredo’s Ristorante along with her husband Bob who was tending bar. During this venture, they made many lasting friendships. ​Shirley was a strong loving woman and had a smile that came from her heart. She was a great listener and was careful with her words before she spoke, as she guided her kids like only a mother could. Shirley had a great sense of humor; she and Bob were a “comedy act” and played perfectly off each other. The holidays were always a fun family affair, and summers at Sylvan Beach and Lake George made many memories. During her spare time, Shirley enjoyed knitting and attending ceramics class, where she inadvertently created the world’s largest Nativity Scene (according to her children). She enjoyed volunteering her time at the annual bazaars at her home parish and taking trips to Atlantic City with the “crew”. The way Shirley conducted her life was extraordinary. She was loved by so many for her kindness and warm empathetic nature. All her grandchildren had a special place in her heart, …and they always brightened the sparkle in her eyes. She shared a special bond with her granddaughter, Kayla, who was always “glued to her Nonna’s hip”. Shirley’s children and grandchildren were the pride and joy of her life, and the legacy of her kind and gentle soul will live on through them. ​Shirley was a communicant of Historic Old St. John’s Church. She held a strong Catholic faith and trusted in the Lord. ​Shirley is survived by her children, Philip F. III and Janine Vivenzo, Krista A. Vivenzo, Anthony M. Vivenzo, and Marissa A. Mario; grandchildren, Zachary Vivenzo, and Hayley Vivenzo; Kayla Humphrey and her dad Steven Humphrey; Sofia Vivenzo, Anthony Vivenzo Jr., Michael Sigal, Caleb Sigal, and Jocelyn Sigal, and their mother Teri Taurisano; and her sister, Joan Mancuso. She will be reunited with her sister and brother-in-law, Camille A., and Bill LaFleur; and her brother, Anthony M. Fanelli, Jr. She also leaves her nephew; James Mancuso III; nieces, Karen Burton, Renè Wright, and Lisa Lewis, and many great-nieces, great-nephews, cousins, and in-laws. Shirley has been a forever friend to Sharon Mazza; and in their sisterly relationship, they loved each other dearly. ​The family is grateful to the staff of the Lutheran Care/Saul Unit for the love and outstanding care they extended to Shirley during her stay. Also, a special thank you to her niece Karen who was an advocate for her aunt which was so appreciated. ​Visitation will be held on Friday, September 10, 2021, from 4:00- 5:30 at the Eannace Funeral Home, Inc. Shirley’s funeral service and Celebration of Life will follow immediately after visitation at the funeral home. Interment will take place in St. Agnes Cemetery at the convenience of the family.

UTICA - Mrs. Shirley A. (Fanelli) Vivenzo Mario, age 74, was reunited with her husband on Wednesday, September 1, 2021 when The Lord called her home. At the time of her passing, those she loved most were in her heart. &#8203;Born in Utica on... View Obituary & Service Information

The family of Mrs. Shirley A. (Fanelli) Mario created this Life Tributes page to make it easy to share your memories.

Send flowers to the Mario family.