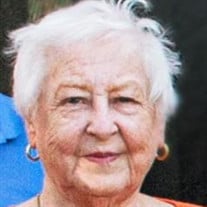 UTICA - Mrs. Shirley Jean (Arcuri) Cannistra, age 86, passed peacefully on Thursday, July 29, 2021 with her devoted family by her side. Born in Utica on March 13, 1935, Shirley was the daughter of the late beloved Dominick “Babe” and Elvira “Mollie” (Tutino) Arcuri. She was a graduate of Utica Free Academy/Class of 1953. On April 28, 1956 she wed James R. “Jim” Cannistra with whom she shared a loving marriage for over 65 years. Shirley was employed by the New York Telephone Company, worked as a proofreader for a local firm, and for the Jewish Community Center for many years. A friend of the New Hartford Public Library, she was a treasurer, fundraiser, and supporter, for the library for over 40 years. She always claimed she got the job because no one else wanted it, but the truth was she was good at it and enjoyed doing it! As the matriarch of her family, her main job was caring for her husband and their four boys; she was a fabulous role model for which her family is eternally grateful, and it was a labor of love that fulfilled Shirley’s life. In her spare time, she enjoyed reading, cooking, socializing, and planning annual vacations which were never missed over 65 years. Their vacation travels included trips throughout New York State as well as Myrtle Beach, Bethany Beach, Cape Cod, and overseas to England, Ireland, China, and her favorite destination ~ Italy! Shirley was of the Catholic faith. She is survived by her beloved husband, her honey, Jim. She was a dear Mom to her sons and daughters-in-law, James “Jim” and Veena Cannistra, David Cannistra, Dan and Julie Cannistra, and the memory of her son Matthew J. Cannistra who she took care of for over 18 years after he became ill and prior to his passing on October 28, 2005. She was Grandmother to eight wonderful and caring grandchildren: Sarah, Sharon, Daniel, Molly and her husband Brian Szmak, Ethan, Jake, Zachary, and Michael; two grandchildren by marriage, Leila, and Toby; and former daughters-in-law, Mary Kate Bland, Jayne Gilbert, and Justine Coffey. She was proud of them all, and they all loved her and appreciated spending time with her, and particularly enjoyed her special chocolate chip cookie recipe. Everyone will miss her cookies, but those who loved her most will miss her as a wife, mother, and grandmother, as well as her sister, JoAnn (Arcuri) Wald (and her late husband George Wald Sr.); and the memory of her brother and sister-in-law, Joseph J. Sr. and Jeanne Arcuri who preceded her; brother-in-law and sister-in-law, Patrick and Ronnie Cannistra; as well as extended family members of the Cannistra, Arcuri, Tutino, and Olivadoti families. The family would like to thank the nurses and staff at MVHS at St. Luke’s Healthcare for their compassionate care and support. Visitation will be held Tuesday morning, August 3, 2021 from 10-11:30 at the Eannace Funeral Home, Inc., followed by her Celebration of Life at 11:30 at the funeral home. In lieu of flowers, donations may be made to the New Hartford Public Library online at https://www.newhartfordpubliclibrary.org/gift-form/. Envelopes will also be available at the funeral home. Interment will take place in St. Agnes Cemetery at the convenience of the family. “We love you and you will always be with us.”

The family of Mrs. Shirley Jean (Arcuri) Cannistra created this Life Tributes page to make it easy to share your memories.

Send flowers to the Cannistra family.