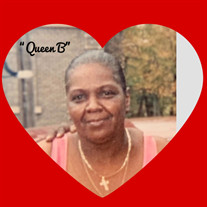 UTICA - Sheila L. Berry, age 62, passed away peacefully on Thursday, September 3, 2020 at MVHS at St. Luke’s Healthcare with her family by her side. She was born on April 15, 1958 in Utica to Annette McClary and the late William Berry, Sr. She also knew the love of her late step-father, John B. McClary. Sheila attended Utica Free Academy where she proudly earned her diploma. She was employed at Abelove’s Linen Company, the Utica City School District as a lunch monitor, and Birnie Bus Company. Sheila gained lots of friendships with the students at Donovan Middle School, where many looked up to her as a mother. Sheila was known to have thrown ‘banging house parties’ as the students would say. Sheila was a positive role model and was well respected by many in her community. As the years went on, Sheila gained a new name, and everyone called her “Queen B”. She was known for wearing her mini skirts, long hair, dress boots, and sassy attitude. Sheila liked to party and have a good time, especially with her family. As time went on, Sheila acquired a love for bingo. As she would tell it, “I’ll never miss a day boarding the 'Lucky Charms' bingo bus”. That was something she enjoyed doing with her mother and her best friend Dahal Burns and many other bingo buddies. Sheila is survived by her loving mother Annette McClary; her children and their loves, Carlietta (Berry) Libertowski and April Libertowski, Theresa Berry, Danyelle Boyd and Marques Phillips, Niesha Boyd and her late son-in-law, James L. “Leon” Moore, Jr. (October 5, 2019), Tiera Boyd and Julio Mohamed, Richard Brown Jr. and Tanya Crouse, and Patrick Berry and Devionte Benson; her sister, Serena Northern and Gino; her special friend, Luther Walters; grandchildren, Alanna, Adrian, Nyasiah, Nevaeh, Omari, Latesha, Quantasia, Tyriek, Quinnasia, Shaniya, Jarian, Tameka, Amani, Jamyra, Darren, Fatima, Keyjuan, Niamiah, Patrick, Jr., Jadah, India, Cartier, Cashis, and Quashaun. Sheila also leaves a host of great-grands; her nieces, including two special nieces, Toccara Engram, and Tekeysha Hendricks; nephews, great-nieces, great-nephews, cousins, aunts and uncles including Arethe and Norman Stuckman; paternal grandmother, Ethel Butler; brother-in-law, Clarence Pugh; and her friends, too many to mention, who loved and cherished her. Sheila was predeceased by her father, William Berry, Sr.; step-father, John McClary; sister, Deborah D. Berry-Pugh; brothers, William “Poncho” Berry Jr., and Keith G. Northern; uncles, James, Willie, and Raymond Carter; and her aunts, Rubie, Rose, and Thelma Carter. Sheila’s family would like to thank the nurses and staff of MVHS at St.Luke’s Healthcare, the ICU and the Dialysis unit for the care and compassion shown to Sheila during her stay. Visitation will be held on Friday from 11:30 – 1:00 p.m. at Greater Grace Church, 1112 Ney Ave., Utica. We kindly ask the cooperation and patience of visitors as we adhere to current health guidelines and restrictions. Sheila’s funeral service and Home Going celebration will commence on Friday at 1:00 at Greater Grace Church, 1112 Ney Ave. At both the visitation and the funeral, social distancing, registration for contact tracing, and a mask covering your nose and mouth will be required. Interment will take place at the convenience of the family. Arrangements have been entrusted to the Eannace Funeral Home, 932 South St., corner of Hammond Ave. Please take a moment to connect with Sheila’s family through the “Memories” section of her obituary. Our prayers go out to all as a sign of our continued support.

UTICA - Sheila L. Berry, age 62, passed away peacefully on Thursday, September 3, 2020 at MVHS at St. Luke&#8217;s Healthcare with her family by her side. She was born on April 15, 1958 in Utica to Annette McClary and the late William Berry,... View Obituary & Service Information

The family of Sheila L. Berry created this Life Tributes page to make it easy to share your memories.

Send flowers to the Berry family.