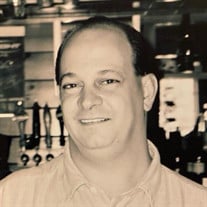 UTICA – Mr. Scott Michael Cittadino, Sr., age 54, passed away unexpectedly at home on Sunday morning, January 9, 2022. Born in New Hartford on July 18, 1967 to Sarah (Ponticello) Cittadino and the late Joseph A. Cittadino, Scott was educated in New Hartford schools and resided in Utica. An excellent cook, Scott turned his passion into his career and held many positions at various local restaurants. He was an attentive and loving man, who possessed a kind heart and gentle soul. Scott was selfless and would often give from what he had, even when it was scarce. He was especially thoughtful and kind to those entrusted to his care, including his concern for and his efforts to ensure his mother’s well-being. Scott particularly enjoyed spending time with his children, grandchildren, and extended family. Recently he was delighted to spend time with his nephew Marcus. Scott was a very outgoing man who made friends easily. He was endearing and non-judgmental to everyone he encountered. Scott loved to take in yard and estate sales, where he would look for the “diamond in a rough.” Ultimately, Scott is remembered for smiling and maintaining a positive attitude, even when he faced obstacles and hardship. Scott was of the Catholic faith. Scott is survived by his mother, Sarah; and his sons, Joseph Cittadino, and Scott, Jr. and his wife Alyssa Cittadino. He also leaves behind his grandchildren, Alonzo, and Giovonno; and his sisters and their spouses, Andrea D. and Bryan J. Goldberger, and Nicole M. and Mark Leary. Scott held close to his heart the memory of his brother and sister-in-law who predeceased him, Marc A. and Karen M. (Zumbo) Cittadino. Scott will live on in the hearts of his nieces, nephews, cousins, his great-niece, Vivienne Stankus, and his many aunts and uncles. Scott shared a special friendship with Judy, who was always there to look after him. He was predeceased by his paternal grandparents, John A., Sr. and Lucy R. Cittadino, and his maternal grandparents, Ponfilo “Pomp” and Antoinette Ponticello. The family will honor Scott’s life in a private gathering. Interment will take place in Calvary Cemetery at the convenience of the family. Please consider a donation to the Compassion Coalition in memory of Scott at www.distributehope.org.

The family of Mr. Scott Michael Cittadino, Sr. created this Life Tributes page to make it easy to share your memories.