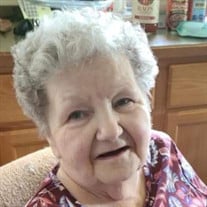 UTICA – Mrs. Sandra D. “Sandy” (Nicholas) Valente, age 78, peacefully passed away on Monday, April 25, 2022, with the love of her family by her side. Born in Utica on August 22, 1943, Sandy knew the motherly love and guidance of Janice Nicholas who was her late father James’ second wife. She was educated locally in the Utica School System. On October 14, 1960 Sandy married, Richard “Dick” Valente. The couple was deeply committed to caring for each other, especially when the other was in a time of need and their children gave them the joy of many blessings. Sandy and Dick shared 55 years together prior to his passing on April 28, 2016. Beginning her career with a position at ICL as a Solderer, Sandy worked there for a period of time prior to her mainstay with the General Electric Co. at the Broad St. location, Radio Receiver Plant, where she shifted between various roles and remained until her retirement. Being a mom and a grandma were Sandy’s greatest joys; she was a very maternal woman who was greatly loved by all those in her care. Sadly, Sandy experienced the great tragedy of having two of her children precede her—though many have admired her ability to persevere! As the years passed, Sandy grew into a “new person” who managed to be kind and even sassy! A passionate woman, Sandy particularly enjoyed working in her Dick’s garden, where they grew vegetables and herbs. They were very bountiful and so Sandy and Dick would share with family and the neighbors. This was Dick and Sandy’s yearly mission! An animal lover, Sandy enjoyed the company of her feline friend “Dakota,” whom she spoiled with no hesitation. In fact, any animal shelter in need knew of Sandy’s kindness and generosity. Sandy’s love of animals influenced her favorite shows, and she watched with devotion “The Incredible Dr. Pol”, a TV show about a country veterinarian who practiced old school methodologies. An all-around movie buff, Sandy would watch everything from her VHSs to her DVDs and Blue-rays, from action to sci-fi. She loved her various collections, including Harry Potter and her old Western video collection. Sandy and her grandkids had a system that if they wanted to borrow any movies, they would need to “sign them out” in the “movie book.” Once returned, they would share in a review of each movie they viewed. Sandy is survived by her beloved children, Richard “Rick” Valente, Randie and Brian Schrader, Tabitha Valente-Cook, and Patricia Valente. She held close to her heart the memories of her two daughters, Corinna who passed as an infant, and Babette who passed at age 12. Sandy was additionally preceded by her daughter-in-law, Sue Valente. She leaves behind her 12 adored grandchildren; several great-grandchildren; and her “second mom”, Janice Nicholas. Sandy will be remembered by her siblings, including Jack (Kim) Grower, Connie (Jim) Kerns, Wendy (Mark) Packer, Janice Nicholas and Mark Lockwood, Kirk Nicholas, Michele (Kermit) Dingle, her brother-in-law, Louie Nutting; and her in-laws, especially Robert Valente, and Jon and Rosemary Valente. She was preceded by her siblings, Greg Nicholas, Terri Aloti, and Linda Nutting. Sandy will live on in the hearts of her many nieces, nephews, great-nieces, great-nephews, and in-laws. Additionally, Sandy was blessed to share in a friendship with Donna Bolinski, who was like a sister and was known as “Aunt Donna” to the kids. Sandy was predeceased by her father-in-law and mother-in-law, Biase John and Fannie (Testa) Valente. The family would like to extend their thanks to: Sandy’s primary care provider, Dr. Francis Constantine; to the hospitalists, nurses, and staff at MVHS at St. Elizabeth Medical Center. Sandy was graced to have a great group of caregivers, especially Virginia Marris, who had tended to her for the greatest length of time, as well as Linda, Valerie, Rosemary, Donna, and Michele, they provided 24-hour care and were a wonderful group of women who allowed Sandy to remain in the comfort of her home, and who cared for her with as much love and dignity as possible. The family commemorated Sandy’s life privately. In lieu of flowers, those wishing to honor Sandy’s life may send a donation to either the Wounded Warrior Project, online at https://support.woundedwarriorproject.org/Default; or to Anita Steven’s Swan Humane Society, online at https://www.anitas-sshs.org/donate/.

The family of Mrs. Sandra D. "Sandy" (Nicholas) Valente created this Life Tributes page to make it easy to share your memories.

Send flowers to the Valente family.