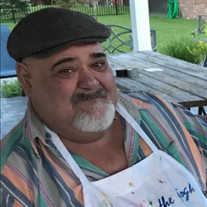 CLINTON - Mr. Salvatore F. “Sammy” Scalise, age 62, passed away unexpectedly yet peacefully on Sunday, July 25, 2021 with those he loved most in his heart. Born in Utica on August 12, 1958, Salvatore was the son of the late Benjamin F., Sr. and Mary H. (Cirasunda) Scalise. He attended the Whitesboro Central School system. At one time, he was married to the former Joann Jones and from that union came the blessing of two wonderful children who admired their parents for the love and guidance they provided. Sammy and Joann remained close to each other’s heart to the very end. Sammy enjoyed a long career in the restaurant business. At the age of 16, he worked at the iconic Pescatore’s Restaurant, then at Howard Johnson’s, Hampton Inn, and The Crystal Chandelier where he worked closely with his dear friend Rudy Scialdo. He then ventured into business for himself when he opened “Sammy’s at the Modernistic”, followed by working at Acquino’s in Rome, and the Thendara Golf Country Club. It takes a special man with an entrepreneurial spirit to be successful in this industry, and Sammy had those attributes. He relocated to Utah where he continued to thrive in the restaurant business as he introduced his eatery Authentic Italian Cuisine ~ the magic was in his sauce, greens & beans, chicken francaise, and homemade bread! He also baked, which was even more gratifying for him. And, he could make over 50 varieties of cheese cake! He was a humble, respected chef who was well-known and well-loved. In 2013 he returned to Utica to enjoy his retirement and help out his family and friends whenever he could. He had a big heart and he will be remembered for his benevolence. His work ethic spoke for itself. Success in the restaurant business hinges on the prerequisites of service and accommodation, and Sammy and his staff worked hard to have a successful and fulfilling evening. Sammy’s compassionate heart was the driving force, and confidentially he encouraged his children to answer the call to adventure, try new things, and do it all with determination. His positive influence was only one of the ingredients that made for a meaningful relationship with his children. Sammy treated family like friends and he was loyal and available to all of them. His heart was an open book to those he loved. Holidays were special and Christmas Eve and the Feast of the Seven Fishes was the most memorable celebration. His Italian heritage and traditions were always honored and handed down to the younger generations. In his precious spare time, he enjoyed the serenity of fishing, accompanied by his granddaughter Bella, and he collected fine cigars that retained their freshness in a humidor. Sammy’s creative hand also took to canvas whereupon he painted landscapes, birds, and animals in the mediums of oil, and most recently, acrylic; he bestowed these gifts to his grandchildren. Sammy’s greatest accomplishment was being a father who was a constant presence for his children and guiding them to adulthood. And when his grandchildren came into his life, they shined bright, with a magnetism that drew him into their hearts. Sammy had his own personal relationship with the Lord, and when he proclaimed himself born again, he relied on scripture for salvation, direction, and peace. Salvatore is survived by his son and daughter-in-law, Michael and Alaina Scalise; daughter, Elena Scalise; and their mom Joann and her children with whom Sammy shared a fatherly love, Matthew, and Alyssa Schiavi, in a beautifully blended family; and his grandchildren, Salvatore Taylor, with whom his Poppi enjoyed fishing and watching him grow up; and Bella Scalise who her Papa affectionately called her, “Bella boots”. He also leaves his siblings, Mary Peters, Lucretia Scalise, Benjamin F. Jr. and Karen Scalise, Susan “Suz-the Lu” Scalise and Douglas Leaf; and the memories of his siblings who preceded him, sister, Joan M. “Joanie” DeFuria; and brother, David F. Scalise. In addition, he leaves his nieces and nephews, Justin and Emmie Peters, David Peters and fiancée Megan; Sara and Justin McBride, and Anthony DeFuria and Jacqueline Rose; great-nieces, great-nephews; special cousins Edith, Danette, Bonnie and Patrick Ducher; and remembering the late Alaina; 2nd cousins Jennifer, and Jessica Sosso; in-laws including Joe Jones; and his best and beloved friends, Rudy Scialdo, Richard Laventure, and Chris Strange. The family is grateful to the amazing personnel of MVHS at St. Luke’s ICU, especially Greg, Andrea, and Tammy; and the entire staff of the Faxton-St. Luke’s Dialysis Unit for their compassionate care and medical expertise. Visitation will be held Sunday, August 1st from 1:00-3:00 at the Eannace Funeral Home, Inc., 932 South St., corner of Hammond Ave. Salvatore’s Prayer Service will commence on Sunday afternoon at 3:00 at the funeral home upon conclusion of visitation.

The family of Mr. Salvatore F. "Sammy" Scalise created this Life Tributes page to make it easy to share your memories.

Send flowers to the Scalise family.