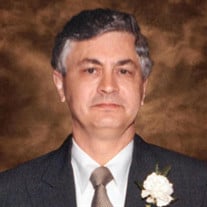 RICHMOND, VA/UTICA - Mr. Salustiano "Sal" Martinez, 95, formerly of Utica, New York, died February 17, 2021, after a long illness. His family was with him at the time of his passing. Born in Schenectady, NY on December 12, 1925, he was a son of the late Salustiano Martinez, Sr. and Raffaela Falace Rey and step-son of Andrew Rey. He was raised and educated in Rome, NY. Sal was married to Carmelita Loudis Martinez with whom he shared a blessed union of 44 years. Carmelita passed away November 10, 2002. Sal was a World War II Veteran, serving in the Marine Corps as a Corporal in the Pacific Theater. He worked many years for Rite Aid Corporation as a Store Manager and later in the Rite Aid Warehouse. He was devoted to his family as a Son, Brother, Husband, Father, Grandfather and Uncle. While residing in Utica, he was a communicant of St. Mary of Mt. Carmel/Blessed Sacrament Church. Sal is survived by his loving daughter, Deborah A. Zaccari and her husband Neil of Richmond Virginia; and his three cherished grandchildren Sara, Matthew, and Rachel. His survivors also include his niece and nephews, Barbara and Stephen Clark, Robert and Shonna Loudis, and Steven Martinez; as well as several great nieces, nephews, and cousins; a brother and his wife, Robert and Betty Martinez of Rome, NY and dear friend Pat Zaccari. He was predeceased by his father-in-law and mother-in-law, Joseph F. and Mayme Loudis, and brother-in-law and sister-in-law Rocco A. and Helen Loudis. Sal’s Mass of Christian Burial will be celebrated on Friday, June 18, 2021 at 11:00 AM at St. Mary of Mt. Carmel/Blessed Sacrament Parish. The family will receive visitors at the conclusion of the Mass. In lieu of flowers, expressions of sympathy in the form of donations may be made in Sal’s honor to Ascend Hospice, 10571 Telegraph Road, Suite 203, Glen Allen, VA 23059. Internment will take place privately in St. Agnes Cemetery.

RICHMOND, VA/UTICA - Mr. Salustiano "Sal" Martinez, 95, formerly of Utica, New York, died February 17, 2021, after a long illness. His family was with him at the time of his passing. Born in Schenectady, NY on December 12, 1925, he was a son... View Obituary & Service Information

The family of Mr. Salustiano "Sal" Martinez created this Life Tributes page to make it easy to share your memories.

Send flowers to the Martinez family.