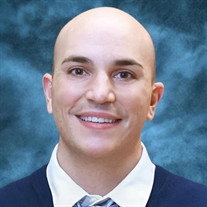 ILION – Mr. Ryan Anthony Biamonte, age 36, passed unexpectedly on Monday morning, February 7, 2022, in the comfort and dignity of his home. Ryan was born in New Hartford on November 29, 1985, to Angela Biamonte; he was also blessed to have the love of his stepfather, Scott Bowers. Raised and educated locally, Ryan graduated from Sauquoit Valley High School/Class of 2004. He then attended SUNY Potsdam, where he received his Bachelor’s Degree in Education. As Ryan started his teaching career, he continued his academic pursuits by studying at University of New England. There he earned his Master of Science in Education. He began working during his younger years by following in his Uncle Johnny’s footsteps – employed to work for the restaurant industry at Temptations, Holiday Inn, Radisson Hotel, and Hart’s Hill Inn. Ryan’s passion for education led to his great fulfillment as a teacher; he was a natural in the classroom. Ryan loved inspiring the youth, and he was honored to have them placed under his guidance and instruction. Ryan began his teaching career in a position with the Utica City School District. He first taught at Kernan Elementary School. Ryan then moved to Ilion and became a fifth-grade math teacher at Gregory B. Jarvis Middle School, where he became known to his students as Mr. B. Known as a kind and loving person, Ryan deeply loved his mom. The two shared an unbreakable bond. He was also known for his love of his Italian heritage. He loved the traditions and remained steadfast in practicing them. One such tradition Ryan enjoyed dictated that he should wear red on St. Joseph’s Feast Day. Not only did Ryan partake, but he always made sure his friends wore red as well. Moreover, Ryan loved listening to Italian music; he had the soul of an old Italian man. Those who loved him fondly remember Ryan’s high school graduation, when he chose old Italian music to be played instead of the popular music of the day. Ryan had a myriad of interests. He was motivated and bright, able to teach himself anything he desired to learn. He was especially proud that he had taught himself how to landscape and tend to gardens, he particularly loved his mums and petunias. An artistic soul with an expert eye, Ryan’s friends also relied on his talents for their landscaping needs. Since moving to his own home, Ryan aspired to be an excellent cook. Ryan enjoyed watching YouTube cooking videos, taking away what he learned and adding his own special twist. He thoroughly enjoyed the process of learning this skill. Additionally, Ryan was known for keeping his house immaculate, inside, and out. He was proud to coach a Lego robotics team, which he guided to remarkable success and even to the State Championships two years consecutively. The team placed first at the SUNY Polytechnic Institute Regional Lego League Championship Tournament. Ryan was excited that his passion for Legos, which had begun as a child, could contribute to his team’s efforts. Ryan furthermore helped a great number of students as he took on a variety of roles, including being a tutor, a JV soccer coach, and a bowling coach at Central Valley. An avid hockey fan, Ryan rooted for the Colorado Avalanche. His passion for the sport had begun early in life when he learned to skate as a child and then participated in Youth Hockey. Ryan’s mom can still picture him in his skates at an early age. He looked forward to his never-ending hockey conversations with his stepfather Scott. Ryan was confirmed at Our Lady of Lourdes Church believing in the Catholic Creed and would often practice it in his own way by prioritizing traditions. His favorite tradition would always be his celebration of the Feast of St. Joseph. Ryan is survived by his beloved mother and stepfather, Angela and Scott Bowers. Scott shared a truly special relationship with Ryan and helped guide him, alongside Angela. He is also survived by his adoptive father, Robert Wright. He will live on in the hearts of his maternal grandmother, Victoria Dineen; and grandfather, Anthony Biamonte, and his wife Susan. Ryan also leaves behind his stepbrother, Ty Bowers; and his Uncle John Biamonte and his wife Elaine. Ryan was proceeded in death by his great-grandparents. Ryan also shared special friendships with Charles and Rachel Maxson, and their two children whom Ryan adored. Better known as “B” to his friends, Ryan had many friendships with an extra-wide circle of friends that he cherished; he loved summertime gatherings with the Howells, Cottos and the Eversons around the fire pit and was always ready for a competitive game of Greed. His family would also like to mention three lifelong friends Gary Pereira, Chris Stearns, and Jeremy West, all of whom Ryan valued their friendships. The family will honor and commemorate Ryan’s life privately. Relatives and friends are respectfully invited to attend Ryan’s Mass of Christian Burial and Celebration of Life which will commence on Monday, February 14, 2022, at 12:00 p.m. at Mary, Mother of our Savior Parish/Church of Our Lady of Lourdes, 2222 Genesee Street. The family will receive visitors at the conclusion of the Mass. All who attend the services are asked to wear red, in memory of Ryan.

ILION &#8211; Mr. Ryan Anthony Biamonte, age 36, passed unexpectedly on Monday morning, February 7, 2022, in the comfort and dignity of his home. Ryan was born in New Hartford on November 29, 1985, to Angela Biamonte; he was also blessed to... View Obituary & Service Information

The family of Mr. Ryan Anthony Biamonte created this Life Tributes page to make it easy to share your memories.

Send flowers to the Biamonte family.