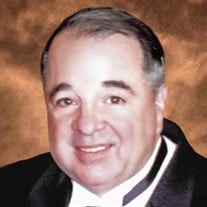 UTICA – Mr. Rosario A. “Russ” Salvo, Jr., age 86, passed away peacefully on Friday, February 11, 2022, with his loving wife by his side. Born in Utica on October 29, 1935, to the late Rosario Sr. and Margaret (DeTullio) Salvo, Russ was raised and educated locally. He went on to serve his country when he joined the U.S. Army and was proud of his time in the military. He was honorably discharged as a Private 1st Class. On September 18, 1969, Russ married the love of his life: the former Yvonne M. Emerson. Their union was a blessing for each of them. The couple celebrated 52 years together. Russ enjoyed a steady career with the United Parcel Service. He worked as a UPS driver for 30 years and it was from this position that Russ retired. A kind, gentle, and honorable man, Russ was the kind of man whom family and friends appreciated, for it was easy to know where one stood with him. Moreover, Russ was a hard worker whose main focus in life was his family and meeting their needs. He loved to share what he had with those he loved. Russ was also a fantastic father. He supported all of his children’s endeavors, eager to offer them – and truly anyone with a need – his help and support. When his grandchildren came into the picture, his commitment to “showing up” continued with the next generation. He never missed any of his kids’ or grandkids’ sporting events or activities, and he was considered a reliable staple at such happenings. Russ was a true family man. When he was not working to provide for his family or spending time with them, Russ enjoyed his volunteer leadership positions. He was President of Frankfort High School Football Boosters Club and also President of the Teamster Retirees Club. Additionally, Russ served on the planning board for the Town of Frankfort. Russ believed in the Catholic Creed and was a parishioner at the Church of Our Lady of Lourdes. Russ is survived by his treasured wife, Yvonne; his daughters and sons-in-law, Colleen A. and Rick Eckler, Sheree L. Williams-Johnson, Marla M. Adorino, and Kellie M. and Eric Sanger; as well as his sons and daughters-in-law, Kenneth R. and Pamela Williams, and Bernard J. Jr. and Adrienne Adorino. Russ cherished the memory of his son, Richard J. “Richie” Salvo, who passed on October 25, 1997. He leaves behind many beloved grandchildren and their loves, including Rana L. and Derek Spada, Ryan E. Talbot, with whom Russ shared a special bond, and his wife Terra Talbot; Heather Marsh; Zoey Adorino; Jacob Sanger, Zachary Sanger, Jonathan Pryor; Bernard J. Adorino III, and Nicholas Rosario Adorino. Russ also will be fondly remembered by several great-grandchildren. He also lost a son, Rusty Salvo, and is survived by an additional son, Peter Salvo. Russ will live on in the hearts of his brothers, Daniel A. Salvo, Sr., and Paul R. Salvo and his wife, Cheryl; and his brother-in-law, John Bianco. He was predeceased by his siblings and their spouses, Anthony “Tony” and Mary Salvo, Fanny “Faye” Bianco, Katherine “Kaye” and Anthony Cannistra, Margaret “Bunny” and Victor Nole, Sr., Marie B. and Alfred T. “Al” Giglio, John J. Salvo, who passed away on December 8, 2021, Josephine and Benedetto Carcone; and his sister-in-law, Lamya Salvo. Russ also leaves behind many nieces, nephews, great-nieces, great-nephews, and cousins. He shared special friendships with Dave Jeffalone and the crew at the Marr-Logg. Russ was predeceased by his good friend, Joe Basi. The Salvo Family would like to extend a special “thank you” to Dr. Johnson and her team, for going above and beyond; to the staff of MVHS at St. Elizabeth Medical Center; and the staff at the MVHS Rehabilitation and Nursing Center, for their outstanding care and compassion. In keeping with his wishes, the family will honor Russ’s life privately. In lieu of flowers, the family asks that memorial donations be made in Russ’s honor to a charity of the donor’s choice. Relatives and friends are respectfully invited to attend Russ’s Celebration of Life and Mass of Christian Burial, where Military Honors will be conferred, on Monday morning, February 21, 2022 at 10:00 at Mary, Mother of Our Savior Parish, Our Lady of Lourdes Campus, 2222 Genesee Street. Interment will take place in Forest Hill Cemetery at the convenience of the family.

The family of Mr. Rosario A. "Russ" Salvo, Jr. created this Life Tributes page to make it easy to share your memories.