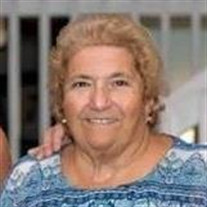 CAPE CORAL, FL/VERONA BEACH - Mrs. Rosanne “Ro” (Fusco) Ondarcho, age 71, passed away unexpectedly on Wednesday, May 13, 2020 with those she loved the most in her heart. Born in Utica on December 1, 1948, Rosanne was the daughter of the late Angelo J. and Marie (DeFiore) Fusco. She was a graduate of T.R. Proctor High School/Class of 1966. On June 22, 1974 she married John Ondarcho with whom she shared a wonderful life and a deeply-rooted love that prevailed during their marriage of nearly 46 years. She had a mission, and with John by her side, together they completed it. When they moved to Florida, she became an owner of a real estate company, Island Real Estate on Sanibel Island. She later sold the company to VIP Realty and relocated to North Carolina where she and John were very involved in designing and building their dream home. She had a knack for decorating and a vision of how the house would reflect the region where they lived. Add to that, her flair for color coordination and unique touches, and she was well ahead of her time. The rural environment allowed them to manicure the acreage around their home, …it was picturesque and incredibly amazing!—HGTV had nothing on her! A decisive, goal-driven gal, Rosanne was an inspiration to her husband and loved ones. She was a good organizer and called out to John when it was time to move on to the next task. When she put her sights on an objective, she made it come true. Rosanne was an enlightened old soul who loved and respected her family. She enjoyed cooking and researching recipes to perfectly complement the meals she prepared for her themed dinner parties. She socialized with style and grace. Holidays were a family affair with an abundance of food prepared; appetizers were a must, and countless courses followed. Memories of these times will never be forgotten. She traveled and enjoyed every opportunity to see new things, and often returned to those locales. Rosanne knew the blessings of her nieces and nephews, great-nieces and great-nephews, and she took a great interest in them. She, in turn, was an important part of their lives, and she knew how lucky she was to have their enduring love and respect. Rosanne had faith in her heart, a virtue that was seen in her many kind deeds that are now tucked away in the hearts of those who loved her. Rosanne is survived by her loving and “patient” husband, John; her sister, Melanie Rose Griffiths; nieces and nephews, Richard A. Griffiths, Jr. (who was also her godson) and fiancée Carrie Atchison, Michael and Doresmi (Torres) Griffiths, Jaimie (Griffiths) and Michael Plainte, and their father, Richard A. Griffiths, Sr.; great-nieces and great-nephews, Makenna Marie Minelli-Griffiths, Everleigh Plainte, Ava Plainte, Daniel Morales, and Leyla Torres Griffiths; aunts, Frances Whitney, June Lia, and Angie Fusco; uncle, Gus Servello; great-uncle, Frank “Junior” Moracco; and many cousins. She also leaves her in-laws, William Cieslak, Jeanette Grube, and Barbara Majka, and their families, Deborah and Mike Dewey and their children Amanda and Chris Schrom and son Jack, Nicole Dewey and Richard George, Melissa Grube and fiancée Chelesea Talarico, Michelle Grube and Kris Murphy and their son Ryan and Pamela Majka; her friends, Cathy (Cook) DiBernardo, and Susan Andrews. She also shared a kinship and friendship with Marty Broccoli, and Gin Hutchinson. May we keep close the memory of the many aunts, uncles, and cousins who preceded Rosanne. The family extends their appreciation to the NY State Troopers, volunteers, and Ambulance personnel for their quick response and valiant efforts. Due to current health concerns and in keeping with federal and state regulations, the family will honor Rosanne’s life privately. Please take a moment to connect with Rosanne’s family through the “Memories” section of her obituary on our website. Our prayers continue to go out to all as a sign of our community support.

The family of Mrs. Rosanne "Ro" (Fusco) Ondarcho created this Life Tributes page to make it easy to share your memories.