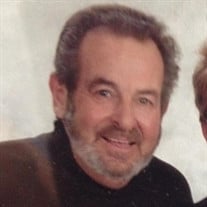 UTICA - Mr. Ronald A. “Ronnie” Rosa, age 77, was reunited with those who went before him when he passed away on Sunday, April 26, 2020 at MVHS at St. Luke’s Health Care with his loving family by his side. Born in Utica on June 7, 1942, Ronald was the son of the late Dominick and Lucia (Pietropaolo) Rosa. He attended T.R. Proctor High School. A proud veteran of the Vietnam Era, Ronnie enlisted in the United States Navy where he honorably served his country as a Fire Fighter on base in Annapolis, Maryland as well as spending time at sea. He and his late friend, John Pisano, served together as mariners bonded by a “buddy system”. On November 7, 1963 he married his high school sweetheart, Lynda M. Colangelo. They were a fun-loving couple, and their teenage love stood the test of time; they were best friends for 48 years prior to Lynda’s passing on September 12, 2012. Ronnie was a responsible, dedicated employee at Revere Copper & Brass in Rome for many years until his retirement. With a smile that lit up a room, Ron was the “life of the party” and he had a sense of humor to prove it. As the youngest of 9 children, he learned many of life’s lessons early as he and his siblings shared responsibilities in managing a huge household. As he matured, he served as the family chauffeur and the cook with the key to all the family recipes. He prepared Sunday dinner, holiday dinners, and camping cuisine. Everyone ate well! His home was equipped with indoor and outdoor kitchens, as well as the famous picnic table topped with Ronnie’s Italian favorites that attracted family and friends at any given time. Indoors, a candy dish on the coffee table was filled with confectionery treats flanked by his outdoor and cook books. In the afternoon, black coffee was shared with his siblings. Wednesdays were Pitch Day, with a buffet in the garage, and Sunday dinner was followed by a friendly game of cards often laced with accusations raised by the Rosa’s that others were cheating! He could be entertained by a good John Wayne movie and inspired by cooking programs. Family was the core of his life. He was so proud of his children and the grandkids ranked #1. He was involved in their lives, supported their events, and made every occasion special. An outdoorsman, Ron enjoyed deer hunting, fishing, picking wild rapini and mushrooms, with only a few people privy to the places that held a bounty of these Mediterranean delights. He also cultivated a vegetable garden necessary to prepare Italian meals. There were no weeds in his lawn, but there were meticulous patterns of cutting lines produced by the lawn mower and the man guiding it. He also looked forward to traveling with family on day trips to casinos, Fly Creek, the Adirondacks, and the race track at Saratoga, in a family bus equipped with “food and spirits”. Raised in a Catholic family, Ron was a parishioner of St. Anthony & St. Agnes Church. He wore a St. Anthony medal to guide him on his journey. He was graced with God’s gifts, …and he was so grateful. Ron is survived by his daughter and son-in-law, Christine and Nicholas Pastorelli; his son, Frank Rosa and Robin Buttacaroli; grandchildren, Stephanie Rose, and Mary Marissa Pastorelli; sister, Isabelle Guido; brother and sisters-in-law, Dominick and Carmella Rose, and Florence Rose. He also leaves many nieces, nephews, great-nieces, great-nephews, cousins; in-laws, Linda Colangelo, and Cynthia Colangelo; dear friend, Andrea Brescia; and many true friendships that lasted a lifetime. He was predeceased by his sisters and brothers-in-law, Adeline and Frank Juliano, Mary and Joseph DeGeorge, Angela “Angie” Rosa; brothers, Patrick J. Rose, John Rosa, and Michael A. Rose; and in-laws, Raymond Guido, twins Francis A. “Fran” Colangelo and Thomas A. “Tom” Colangelo, and Richard Colangelo. The family extends sincere thanks to Dr. Samir Desai and his staff for their attentive care, and the personnel at MVHS St. Luke’s/6th Floor who took exceptional care of Ron and his family. Expressions of sympathy in the form of donations may be directed to the Regional Cancer Center, 807 Newell St., Utica, NY 13502 or online at https://mvhealthsystem.org/location/faxton-campus. Ron will be laid to rest beside his beloved Lynda. Due to current health concerns and in keeping with federal and state regulations, services will be held with immediate family only. Please take a moment to connect with Ronnie's family through the “Memories” section of his obituary on our website. Our prayers go out to all as a sign of our continued support.

The family of Mr. Ronald A. "Ronnie" Rosa created this Life Tributes page to make it easy to share your memories.

Send flowers to the Rosa family.