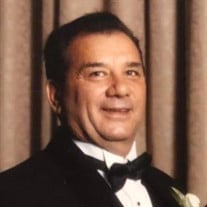 SAUQUOIT - Mr. Ronald J. “Ronnie” Rich, age 74, passed away unexpectedly on Tuesday, January 26, 2021. Born in Utica on May 10, 1946, Ronald was the son of the late Joseph R. and Frances (Coromato) Rich. He attended Roosevelt Elementary School and graduated from T.R. Proctor High School/Class of 1964. A proud veteran, Ronnie served his country with honor as a member of the United States Army. On October 18, 1969 he married the former Anna Marie Fiore with whom he shared 51 years blessed with beautiful children, grandchildren, and family adventures. Ronnie and Anna Marie worked together to make each other happy. Ronnie held several positions over the years. He worked in construction with various area companies, was employed at the Masonic Home as a staff member in the Grounds and Maintenance department of a well-cared for property, and lastly held a job at Special Metals as a machine specialist and operator, the position from which he retired and most enjoyed. He loved the ocean, walking the beach and challenging the beauty of the waves. That was his happy place. One might think that his love for the water began with the Rich family camp at Sylvan Beach where they enjoyed their endless summers. A family man, Ronnie was so proud and protective of his children. He had a wicked sense of humor, a nickname for everyone, the ability to light up a room, and the knack of making everyone laugh. What a gift! His stories were legendary, and the most famous was about his attendance at the original Woodstock Rock Festival in 1969 where he saw the band “The Who” perform when all were young. In later years, a family trip which included his grandchildren to Las Vegas was intended for him to see the band “The Who” once again of which he got to tell him that he saw them back in the day. lf there was ever a family vacation, he was there. When the grandchildren came, they were enthralled by his lifestyle and funny stories. He was so full of life that they always wanted to spend time with him. He was the “PaPa” and they loved and adored him. From their childhood to adulthood, he was always there for them, and he felt so blessed for his relationship with them. He loved vintage cars and attending car shows; and above all, he was a guy who knew how to pick a car, and he had a daily ritual of washing and detailing it with such pride. His black Pontiac GTO was his favorite ride. Ronnie loved biking with no destination in mind, but always ended up at a place where he could have his Dewar’s on a lot of ice. Music was his passion, including different genres, always played with the volume up! Back in the day when Ronnie would put the pedal to the medal, he was known to have gotten about 9 million tickets.... and always dropped his sister’s name just as many times of which she would deny, deny, deny. Those who knew and loved Ronnie also remember him sitting around the table with his family listening to his hysterical stories and thinking “You can’t make this stuff up!”, and everyone would fall off their chairs laughing. He loved the outdoors, worshipped the sun, and always strived for making each day count, and each day great. He lived the “Peter Pan Syndrome” and will always be remembered for never wanting to grow old or going grey. He started off having a great year, but some obstacles got in the way. He was young at heart and he truly had not lived enough of life, but we believe that he is in heaven carrying on. Ronnie is survived by his wife, Anna Marie; his children and their spouses, Melissa A. and Phillip Grande, Kimberly A. and Mark Santomassino, and Joseph V. and Dawn (Leone) Rich; his grandchildren, Antonio V., and Adrianna C. Grande; Briana, Marco V., and Angelo J. Santomassino; and Salvatore J. Rich. He also leaves his siblings and their loved ones, Dolores “Dee” and Ronald Critelli, Shelly and Roland Lamothe, Virginia “Ginny” and Ralph Messina, Bryon and Anne Rich, Doreen Rich, and the memory of his brothers who preceded him, Wayne A. Rich (1982), and Joseph Rich (2010); his nieces, nephews, great-nieces, great-nephews, cousins, aunts and uncles. Ronnie was a people person and he made friends from childhood to the present, including his Myrtle Beach snow bird buddies. Everyone meant something to him and his memory will remain with them. He was predeceased by his in-laws, Vincent and Jane (Muto) Fiore; and his aunt, Marie Fiore. The family is grateful to the staff at MVHS at St. Luke’s Healthcare ICU for their outstanding care, love, and compassion; all the attending physicians for their medical efforts; and nurses Sue and Stephanie who kept the family connected with Ronnie, and for that, they will not be forgotten. Everybody was amazing. The family will honor and commemorate Ronnie’s life at a private time, and they will announce a date and time when all will be safe to have a true celebration of this great man’s life. During this time of social distancing that we are all experiencing, please take a moment to connect with Ronnie’s family through the “Memories” section of his obituary. Our prayers go out to all as a sign of our continued support.

The family of Mr. Ronald J. "Ronnie" Rich created this Life Tributes page to make it easy to share your memories.

Send flowers to the Rich family.