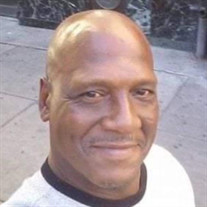 UTICA - Mr. Ronald A. Pierce, age 56, passed away unexpectedly on Monday, August 9, 2021. Born in Utica on November 9, 1964, Ronald was the son of the late John W., Sr. and Thelma (Blackshear) Pierce. He received his education in local schools and attended Utica Free Academy High School. Ronnie was an avid fan of football, baseball, basketball, and fishing. He was a protector of his children, grandchildren, sisters, brothers, and friends. He was full of life, laughter, and fun, and whenever Ronnie was around, it was always a good time. He enjoyed cooking, barbecuing, and entertaining his family and friends, …and he will be greatly missed. He leaves to mourn his passing his four children, DéShanna, Ronnie Jr., Ronisha, and Ashley; his cherished grandchildren, Leiha, Joshaun, SáBreya, Zyire, Khaza, Roniaha, Charisse, Izaiah, and Trinitty; his four sisters and a brother, Carol, Patricia, Peggy (Jose) Torres, Karen, Melanie, and John W. Jr.; and the memory of his siblings who preceded him: Donald, Tony, Carrie, and Patrick. He also leaves many nieces and nephews, especially niece Nerissa; cousins; and a host of friends especially, Kenny Patterson, Ben Heath, Calvin Lange, and Anthony LoConte. Ronnie also had a “left right hook” relationship with his canine Kodak. He was predeceased by his maternal grandparents, Rev. Matthew and Mary (Butts) Blackshear; paternal grandparents, Lula Mae (William) Tillery and Josh Pierce; and a favorite cousin, Porter. Visitation will be held on Saturday, August 21st from 2-4 at the Eannace Funeral Home, Inc., 932 South St., corner of Hammond Ave. Ronald’s Home Going Service and Celebration of Life will follow at 4:00. Interment will take place in New Forest Cemetery at the convenience of the family.

UTICA - Mr. Ronald A. Pierce, age 56, passed away unexpectedly on Monday, August 9, 2021. Born in Utica on November 9, 1964, Ronald was the son of the late John W., Sr. and Thelma (Blackshear) Pierce. He received his education in local schools... View Obituary & Service Information

The family of Mr. Ronald A. Pierce created this Life Tributes page to make it easy to share your memories.

Send flowers to the Pierce family.