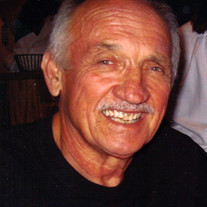 YORKVILLE - Mr. Ronald W. Duda, age 82, passed away unexpectedly on Monday, June 1, 2020 with his loving family by his side. Born in Utica on August 10, 1937, Ronald was the son of the late Walter L. and Sophie (Slivonik) Duda. He was a graduate of Utica Free Academy/Class of 1955. A proud veteran, Ronald enlisted in the United States Navy on November 10, 1955 and served his country with honor as a member of the original crew of the U.S.S. Saratoga, earning him the title of Plankowner when the ship was commissioned. On October 3, 1959 he married the former Marguerite Capuana at St. Patrick’s Church, a union that spanned over 60 years. Ronald worked in his area of expertise as a Steamfitter for the Plumbers & Pipefitters Local Union #79 employed by various local companies over the years. He practiced his Catholic faith at Holy Trinity and Our Lady of the Rosary parishes. Ronald is survived by his devoted wife, Marguerite; his daughters and sons-in-law, Chris and Tony DeSarro, Kim and William P. Carroll; grandchildren, Anthony and Ilene DeSarro, Ronnie DeSarro and Kim Tran, Brianne DeSarro and PJ Ficcaro; Michael Carroll and Natalie Smith, Nicolette and Scott Perritano; great-grandchildren, John Anthony DeSarro, the anticipated birth of Dominic Daniel DeSarro; Santino Michael Perritano. He also leaves his in-laws, Dr. Nicholas and Marilyn Capuana, Leonard and Ann Capuana; as well as nieces, nephews, cousins, especially Angela LaForge, and friends. He was predeceased by his beloved grandparents, aunts, uncles, and cousins, especially Stephanie Borek. The family is grateful to MVHS at St. Luke’s Healthcare Emergency Department and ICU staff, especially Pauline and Tammy, for their compassion during a difficult time. Special gratitude is extended to the EMTs and the Volunteer 1st Responders for their timely response and care. The family will honor Ronald’s life privately. Funeral services will be held with immediate family only. Interment will take place privately at Holy Trinity Cemetery with Military Honors conferred. In lieu of flowers, memorial contributions may be made to the Leonard J. Capuana Scholarship Fund c/o The Community Foundation of Herkimer and Oneida Counties online at https://foundationhoc.org/give or by mail to 2608 Genesee St., Utica, NY 13502. Please take a moment to connect with Ronald’s family through the “Memories” section of his obituary on our website. “There are no goodbyes for us. You will always be in our hearts.”

YORKVILLE - Mr. Ronald W. Duda, age 82, passed away unexpectedly on Monday, June 1, 2020 with his loving family by his side. Born in Utica on August 10, 1937, Ronald was the son of the late Walter L. and Sophie (Slivonik) Duda. He was a graduate... View Obituary & Service Information

The family of Mr. Ronald W. Duda created this Life Tributes page to make it easy to share your memories.

Send flowers to the Duda family.