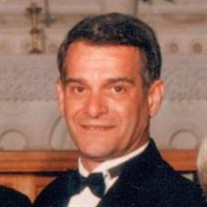 DEERFIELD - Mr. Rocco A. “Roc” DePerno, age 79, was reunited with his wife when he passed away on Friday, June 12, 2020. Born in Utica on July 24, 1940, Rocco was the son of the late Carmen and Carmela (Conte) DePerno. He attended St. Agnes Grammar School and was a graduate of T.R. Proctor High School/Class of 1958. A proud veteran of the United States Army, he honorably served his country stateside as a sharp shooter. Upon completion of his military service, he continued his education at Mohawk Valley Technical Institute (MVTI) majoring in Business Management. He then attended Utica College of Syracuse University where he earned a Bachelor of Arts degree in Business Administration. On September 21, 1963 he married his high school sweetheart, Carolyn D. Brown, with whom he shared 36 years in a union bonded by love for each other and their family. His beloved Carolyn passed away on November 26, 1999. His business talents were seen through his employment at Utica Drop Forge, later known as Kelsey Hayes, and lastly known as Utica Corp. Roc held various titles including Data Entry, Director of Purchasing, and Director of Finance. He also served as President of the Kelsey Hayes Employees Federal Union. He retired after a fruitful, fulfilling career. As a father, he had an open-door policy with his kids and their friends. He was fair, had rules, and by today’s standards, he was “OCD” on so many levels. Roc allowed for his children to have pool parties, friendly card games, and “The Concord Parties”. When he worked around the house with machinery and tools, he shared his skills and safety measures with his kids, valuable information and insight which they retained and utilized until this very day. During the summer, Sylvan Beach was the second home to the DePerno family. He and his father Carmen always worked side by side at the infamous Forest Hotel. There were weekends of fishing, camp fires, and picturesque sunsets completing the day. He and Carolyn enjoyed so many summers when they were raising the boys. They also enjoyed a special vacation spot at Myrtle Beach, South Carolina. Roc was blessed with virtue of integrity, a hard work ethic, and had a great appreciation for life. He was a meticulous dresser, a smooth dancer, and when he socialized he was always assured to have a great time! Roc was endowed with an abundance of energy, and he was the focal point of attention when he walked into a room. An avid golfer, he favored the Westmoreland Golf Club fairways, and as a league bowler, Riverside Lanes was the alley of choice. Of course, Roc was a fan of the NY Yankees and NY Giants. Rocco was a parishioner of Historic Old St. John’s Church; he was a man of faith who held the glory of God in his heart. Rocco is survived by his three boys and daughters-in-law, Richard DePerno, Robert and Sherry DePerno, and Marc and Jamie DePerno; his adored grandchildren, Richard DePerno/USN and his wife Summer, Brandon DePerno, Nicholas DePerno, and Nathaniel DePerno; Michael, and Matthew DePerno; Ryann, and Allyson DePerno. Left to remember his memory are his sisters and brothers-in-law, Lenora Fava and Joseph Spine, and Cynthia and Robert Hobaica. He also leaves his nieces, nephews, great-nieces, great-nephews, cousins; uncle, John DePerno; in-laws, Joanne Brown, Irene Brown (late husband William Brown), and his late brother-in-law, Lawrence Brown; and longtime friend, Joe Nimey, Jr. He was predeceased by his nephew, Francis “Frankie” Lacatena. The family extends their gratitude to the staff of the Presbyterian Home of Central NY for the compassionate care rendered to Roc during his stay. Due to current health concerns and in keeping with federal and state regulations, the family will honor Rocco’s life privately and funeral services will be held with immediate family only. Memorial donations in Rocco’s memory may be made to ALS of Utica online at www.alsutica.org or by mail to ALS of Utica, 9169 River Road, Marcy, NY 13403. All donations will be made in honor of Roc’s wife Carolyn DePerno. Please take a moment to connect with Roc’s family through the “Memories” section of his obituary on our website. Our prayers continue to go out to all as a sign of our community support.

The family of Mr. Rocco A. "Roc" DePerno created this Life Tributes page to make it easy to share your memories.

Send flowers to the DePerno family.