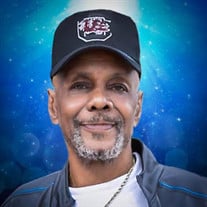 Mr. Robert Alvin “Old Man” Lucas, Sr., age 72, passed away on Saturday morning, October 16, 2021 with those he loved most in his heart. Born in Cleveland, OH, on March 2, 1949 to his beloved mother Mary Elizabeth Grant who served both roles of Mom and Dad, Mary and her son Robert moved to the welcoming city of Utica, which they then called home. Robert held numerous positions, most notably an assembler at Rock City Box Co., which he held for numerous years. Robert shared in a romantic and humorous life partnership with his love, Bonita Rene Brown, who passed away on November 10, 2014. Their love was a unique one, with a persona distinctive only to them. A man who marched to the beat of his own drummer, Robert’s favorite saying was: “Reach out and grab the gusto because you only live once!” Robert had a green thumb and had house plants galore. He tended to his two parakeets who had the freedom of his home and the affection of his heart. He was known to see life through his own “lens.” One could say he truly embraced life to the fullest and yet he was very committed to his own personal opinions, and a man of little compromise. He enjoyed many creative, detail-oriented endeavors, such as building dollhouses, model airplanes, and jewelry boxes. Robert is survived by his mother, Mary Elizabeth Grant; and his sons and their loves: Robert Alvin Jr. and Jazmarie Lucas, Laquan Brown and Tiffany Mays, and Jahari Brown. He also leaves behind many grandchildren, including Nevahea, Laniyah, Zayden, Nazir, and Pharelle Lucas; as well as several great-grandchildren; his brother Richard Leroy Lucas; his sister Karen Renee Jackson or Karen Lucas; and the late Kenya Hawkins, who was his cousin but grew up as a sister; his cousins; his nieces and nephews; and his brother-in-law, Anthony Mills. He shared numerous friendships, and was loved by many, but not enough. The family honored and commemorated his life privately.

The family of Mr. Robert Alvin "Old Man" Lucas, Sr. created this Life Tributes page to make it easy to share your memories.