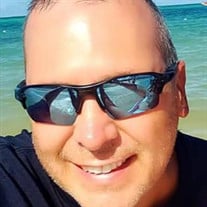 DEERFIELD - After a long, courageous battle, Robert “Bobby” Hoyle, finished the race with his two girls, Cara and Kyleigh by his side holding his hands. He was called home to be with the Lord on Holy Thursday, April 9, 2020. Robert was born on December 24, 1969. He is the son of Lois Hoyle of Marcy, NY and the late Eugene “Geno” DiFondi Jr. of Sun City, Arizona. Robert attended Utica schools and it is there where he met his lifelong soulmate, Cara Bolton. They were married at St. Anthony's Church on September 11, 1993 and were blessed with almost 27 beautiful years of marriage. On November 27, 1996 Robert’s princess, and pride and joy, Kyleigh was born. They shared such a special bond. She was always daddy's little girl, and from the moment she was born, she always made him so proud. Robert's whole world revolved around Cara and Kyleigh, his “two girls." Robert worked for several years for the Oneida County Court System and then attended and graduated from both NYS Corrections Officer Academy and NYS Court Officer Academy. He was currently employed at Midstate Correctional Facility as a NYS Correctional Officer and worked at multiple Correctional Facilities including Greenhaven, Coxsackie, Auburn, and Cayuga. Robert enjoyed life, whether it was taking a family vacation, taking a Sunday drive, playing a board game, or just watching a movie at home. He didn't care what he did as long as he did it together as a family with Cara and Kyleigh. Robert was a HAM radio operator with a call sign of KC2MHE. He enjoyed riding his motorcycle with his buddy, John Murphy. He loved to barbecue and smoke foods in his backyard. He and Cara spent countless hours canning pickles and making salsa. Sundays were “Hoyle Family Fun Day”, and making memories was always a priority. He was the best husband and dad anyone could ever wish for, and he is already so missed. Robert leaves behind so many that will miss him very much: his best friend/wife, Cara; his precious daughter, Kyleigh; his mother, Lois; sister, Jennifer Voce; special niece and nephew, Kaitlyn and Kevin (who was like a son to him); great nephew, Caleb; brothers, Christopher DiFondi and Anthony DiFondi; sisters, Mary Difondi, Michelle Woodcock, Beth Difondi, and Karen Sorrell; in-laws, Joanne Warner and Francis Bolton; brother-in-law, Bryan and Rebecca Bolton; nieces, Isabella and Baylee; lifelong childhood friend “brother”, Bill DeNigro; and his good friend, Tim Jolls. Robert was predeceased by his father Eugene DiFondi Jr.; brother, Eugene DiFondi III, father-in-law, David Warner; and his grandparents, Gerald and Theresa Hoyle. During his four year battle with cancer, Robert became very close with the Lord. His faith and being able to help others became a top priority. He reached out and touched the lives of so many, always with the intent to comfort and point their eyes to our Lord. He sent "Get Well” and "Thinking of You" cards to people he had never even met. If he found out someone was sick or battling cancer, he wanted their address so he could get a card out to them. He always started the card with, "Hello, my name is Bob Hoyle. You don't know me but I wanted to tell you I'm praying for you." On March 20, 2020, just a few weeks before Robert's death, he sat in his chair in the living room and asked, "What can I do from this chair to help our community with the COVID-19 pandemic?" He prayed on it and came up with the idea of starting a Facebook group called "Helping Hands COVID-19." The group exploded overnight and currently has over 3,300 members. There have been many families helped because of this group. Redeemer Church had become his second family. Pastor Jim Synakowski was always there for Robert whether it was making visits to him while he was hospitalized or just enjoying coffee in his living room. Pastor Jim spent many hours sitting and talking with Robert about Jesus and our salvation. On August 3, 2019, Robert was water baptized at Redeemer Church, accepting Jesus as his Lord and Savior. Robert was very proud about his baptism and told everyone he knew. The family would like to thank Dr. Alicia Detraglia at MVHS, Dr. Jessica Lin at Massachusetts General Hospital, and Dr. Michael Seth Rabin at Dana Farber Cancer Institute. In lieu of flowers, please consider making a gift to ROS1 lung cancer research in Robert’s honor. Donations can be made on the following website: www.giving.massgeneral.org/target (please designate “Targeting a Cure for Lung Cancer Fund”). Alternatively, checks can be made to Massachusetts General Hospital. In the memo line, please note that the tribute is in honor of Robert Hoyle, designated to Targeting a Cure for Lung Cancer Fund. The checks can be made to the following address: Carrie Powers, Development Office, Massachusetts General Hospital, 125 Nashua Street, Suite 540, Boston, MA 02114. A celebration of Life will be held at Redeemer Church on Herkimer Road in Utica in the future. During this time of social distancing that we are all experiencing, please take a moment to connect with Robert’s family through the “Memories” section of his obituary on our website, www.eannacefuneralhome.com. Our prayers go out to all as a sign of our continued support.

DEERFIELD - After a long, courageous battle, Robert &#8220;Bobby&#8221; Hoyle, finished the race with his two girls, Cara and Kyleigh by his side holding his hands. He was called home to be with the Lord on Holy Thursday, April 9, 2020. Robert... View Obituary & Service Information

The family of Mr. Robert "Bobby" Hoyle created this Life Tributes page to make it easy to share your memories.

Send flowers to the Hoyle family.