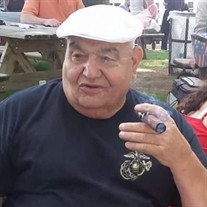 UTICA - Mr. Robert K. “Jap” Grande, age 83, passed away on Monday, April 5, 2021 in the comfort and dignity of his own home with his loving family by his side. Robert was the beloved son of the late Rocco and Carmella “Cora” (Barbero) Grande. He attended local schools, and was a proud veteran of the United States Marine Corps. He was honorably discharged in 1959. The love for his country and fellow Marines remained close to his heart. On August 20, 1960, Bob married the former Pauline Catera. Blessed with a 60 year union, they were truly soulmates and their love for each other never wavered. Bob began his construction career in 1959 with ND Peters & Co. where he developed the true love for his trade. He later joined Murnane Building Contractors where he became proficient in all aspects of concrete construction. He cherished the many lasting friendships created there over the years. Bob’s family was the light of his life. A loving patriarch, he truly lead by example. He was always present in his children’s and grandchildren’s lives, lending an ear to listen, giving words of encouragement, and sharing a story or two about the “old days”. They cherished each moment spent with him and will forever carry on his legacy. His daughters, Doreen and Gina lovingly cared for their father tending to his every need in his last days; his sons-in-law, Mike and Tim held a special place in his heart; his sons, Bobby and Paul reassured him the family would be taken care of; and his grandsons assisted in providing him comfort in his final days. They all NEVER left his side. Bob’s favorite pastimes included bowling and trips to the Saratoga Raceway. He was an avid Yankees fan and founding member of the Social Athletic Club. Bob is survived by his soulmate Pauline, who “loved him from the first moment she saw him”, his children, and their spouses, Robert K. Jr. and Mary Grande, Regina “Gina” and Timothy Histed, Doreen and Michael J. Heinrich Sr., and Paul Grande and former daughter-in-law Rae “Toogie” Grande. Grandchildren, Timmy, and Patrick Histed, Michael J. Jr., and Matthew Heinrich, Brittany Mildner, Jessica, and Paulana Grande. Great-grandchildren, Sonja Mildner, Aria Mildner; Rowan Aguilar; and Raelyn Roth. He also leaves many nieces, nephews, great-nieces, great-nephews, cousins; sisters-in-law, Shirley Catera, and Marilyn Catera; his loyal friends, Mike Ambrose, Tony Putrello, who was like a son to him, and will be forever known as “5:00 Tony”, and Maria and Matthew Kozak. The family was blessed with the love and support of Christine Vetere, and Angel Le, who are an integral part of the family. He will be reunited with his buddies Butch Putrello, and Ralph Ventura. Together, they will resume pouring concrete. He was predeceased by his brother and sister-in-law, Michael and Carmella Grande; and his in-laws, Joseph and Cosmina Catera, Michael Catera, Santo and Carmella Catera, Josephine and John Catera, and Joseph Catera. Bob was blessed to have his family care for him, and when the time came for additional comfort care and guidance, the personnel of Hospice & Palliative Care were there. Special thanks are extended to nurses Crystal, Beverly, Annie, and Cari. They are true angels on Earth whose compassionate care was so appreciated. Visitation will be held Thursday evening, April 8, 2021 from 4:00-6:00 at the Eannace Funeral Home, Inc., 932 South St., corner of Hammond Ave. Robert’s funeral service and Celebration of Life will commence on Friday morning at 11:00 at St. Mary of Mt. Carmel/Blessed Sacrament Parish where his Mass of Christian Burial will be offered with Military Honors conferred. Face masks covering your nose and mouth are required and social distancing and contact tracing will be implemented at both locations. Those wishing to express an act of kindness in Robert’s memory may make a contribution to Hospice & Palliative Care, Inc. online at https://hospicecareinc.org or by mail to 4277 Middle Settlement Road, New Hartford, NY 13413. Envelopes will be available at the funeral home. Interment will take place in Calvary Cemetery. This obituary was lovingly written by Christine Vetere and Bob’s children.

The family of Mr. Robert K. "Jap" Grande created this Life Tributes page to make it easy to share your memories.

Send flowers to the Grande family.