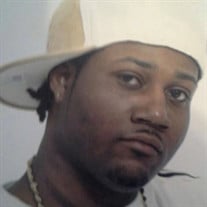 WINGATE/UTICA - Mr. Richard Donnell “Rich” Smith, age 43, passed away peacefully at his home on Friday, September 25, 2020. Born in Utica on March 27, 1977, Richard was the son of the late Gail (Cookie) Smith and late Cornelius McCracken. For a period of time he resided in Wingate, South Carolina, and subsequently attended Utica schools. Currently, Rich was employed by O.W. Hubbell & Sons, Inc. in Yorkville. He held a position of forklift operator and was admired by those he worked with for his strong work ethic. By nature, he was a quiet guy, but when he was around family and friends, his lighthearted personality shined through and his smile lit up a room. His music had to be loud, and the lyrics were recorded to memory. At gatherings with his family, he enjoyed grilled barbecues, laughter, and talkin’ junk. He knew the sense and security of family, and the love he felt was awesome. Rich had a deep love for his mom, and after her passing he lived a more private life. He kept his social circle small, but he had a host of friends with the love brotherhood. Richard is survived by his daughters, Jyda Lekeise, Valentina Smith; son, Zymiar Smith; sisters Anne McCracken, Jessica McCracken, Sandra McCracken, brother James McCracken uncles and aunts, Charles (Jane) Smith, Howard (Patricia) Smith, Loretta Smith, Eddie Roy Smith. He was predeceased by his grandparents, Ola Mae (Anderson), and James Smith, Sr. and uncle, James Smith, Jr. The family extends sincere thanks to Richard’s employer and work family, his friends, and the love of his family that helped everyone through this difficult and trying time. Visitation will be held Friday from 10:00 – 12:00 at the Eannace Funeral Home, 932 South St., corner of Hammond Ave. Richard's Home Going service and Celebration of Life will commence on Friday at 12:00 at the funeral home immediately upon the conclusion of visitation. Interment will follow in New Forest Cemetery. Please take a moment to connect with Rich's family through the “Memories” section of his obituary. Our prayers go out to all as a sign of our continued support.

The family of Mr. Richard Donnell Smith created this Life Tributes page to make it easy to share your memories.

Send flowers to the Smith family.