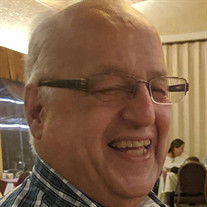 UTICA - On Saturday morning, April 18th 2020, our dad left this earthly life at the age of 67 to begin his next journey with those who have passed before. Dad was born on October 8, 1952, the second son of the late Lawrence and Fay (Ruggiero) Fiorentino. Raised locally, he graduated from TR Proctor High School, class of 1970. He continued his education at H.C.C.C. In 1974, he married our mother, Merry Christian, a union that has lasted 45 years and blessed them with three children. Anyone that knew Dad knows that he is an incredibly hard and meticulous worker. Before his career in car business began, he was the manager of Stereo Center in the 1970s. Through the 1980s he worked in sales with NJ Curri’s and later as co-owner at Tobin Chrysler Dodge in Clinton, NY. He had most currently worked at Rome Victory from which he retired in late 2017. The only thing more important than work in Dad’s eyes was family and he worked hard to strike a balance to give both his all. He was able to maintain a longstanding Italian tradition of Sunday Dinners up until this past Easter Sunday. If you couldn’t make it, you better stop by for leftovers which were always in abundance. Our childhood memories are filled with the remembrance of Dad’s love of amusement parks, miniature golf, and ice cream. He went over the top every Christmas and would not open a single gift until we were through, so he could fully appreciate the joy of the moment. Dad’s proudest role in life was undoubtedly becoming a Papa to his two grandsons, Maxwell and Miles Olivera. From the moment they were born, everything he did was for them. Maxwell had been lucky enough to stand alongside Papa and learn how to make sauce and homemade pizza. Miles had the honor of being babysat daily by Papa and NiNi, and together they would frequent Caruso’s Pastry Shop, Chanatry’s and the Avico Warehouse to stock up on the essentials. They will never, ever forget you. Left to share his spirit with the world is his wife, Merry; son and daughter in-law, Richard Fiorentino, Jr. and Andrea (Grabski); daughters, Christa “Fi” Fiorentino, and Marissa Fiorentino (Joe Sabo); grandsons, Maxwell and Miles Olivera, and their father, Travis Olivera. Also mourning the loss of dad are his brother and sister-in-law, Ron and Norma Fiorentino; sister and brother-in-law, Diane and Dan Robertello; his aunts, Nina Fiorentino, and Nicolette Fiorentino; and uncle and aunt, Anthony and Linda Ruggiero. He also leaves his Christian family in-laws, Roberta Christian, Jeanne Wailes, Cindy LaPorte, Patty and Ted Bilsky, Lisa Christian, Rod and Susan Christian, Karen Christian, and Scott and Teresa Christian; and many cousins, nieces, and nephews who will surely miss getting their chops busted by Uncle Rich. Dad was predeceased by his parents, Lawrence and Fay Fiorentino; brother, Lawrence “Larry” Fiorentino, Jr.; mother in-law, Beverly Christian; brother-in-law, David Christian; and many beloved aunts and uncles, with special mention of his “Auntie” Rose Calaguiro. Our family would like to extend deep appreciation to dad’s doctors, Dr. Fred Talarico, Dr. Nicholas Qandah, as well as the ICU staff at St. Luke’s Hospital. Dr. Q, you went above and beyond for our dad and our family and we will always hold the sincerest gratitude in our hearts for you. You not only guided us through the most difficult experience we have ever encountered, but our dad as well. Private services have been entrusted to Eannace Funeral Home, Inc. with interment at Calvary Cemetery. Due to the social restrictions, we are unable to gather at this time but will hold a Celebration of Life service in the future. Those wishing to express an act of kindness in dad’s memory may make a donation to Mother Marianne’s West Side Kitchen online at https://mmwsk.org or by mail to Mother Marianne’s West Side Kitchen, 702 Columbia St., Utica, NY 13502. In honor of our dad, it is our hope that anyone who has been touched by his presence, to fondly remember him by sitting down and enjoying a nice meal with family or friends. This tribute was lovingly created by his daughter, Marissa.

UTICA - On Saturday morning, April 18th 2020, our dad left this earthly life at the age of 67 to begin his next journey with those who have passed before. Dad was born on October 8, 1952, the second son of the late Lawrence and Fay (Ruggiero)... View Obituary & Service Information