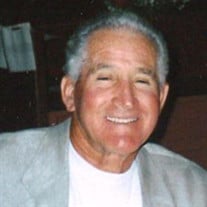 UTICA - Mr. Remo A. Zegarelli, age 86, entered into eternal rest on Sunday, May 17, 2020 after a courageous battle with his loving wife at his side. He passed away at the Abraham House Rome location. Born in Utica on March 13, 1934, Remo was the son of the late Vincenzo and Maria Carmine (Fiore) Zegarelli who were humble immigrants from the town of Ausonia, Province of Caserta, Italy. Remo was a graduate of T.R. Proctor High School/Class of 1953 excelling in the sports of Cross Country and Track. A proud veteran of the Korean Conflict, he honorably served his country in the United States Army from 1953-1956. On June 4, 1960, he wed the former Theresa Migliaccio. Remo describes their marriage as a match made in heaven. Their love for each other deepened through the years, and how proud he was of the fact that they were so well suited for one another. Remo was employed by Griffiss Air Force Base as a Procurement Officer in the shipping and receiving department. He also held a later job at the Vernon Downs Raceway. Remo was conscientious of physical fitness and participated in many activities including playing the vigorous sport of racquetball and working out at Planet Fitness. A true sportsman, he enjoyed hunting and fishing and was a highly accomplished, competitive golfer; he challenged himself to the game at all times! He was a member of the Crestwood Golf Club whereas they made him an honorary member for life. He won many tournaments and looked forward to his yearly trip with the “Utica gang” to Savannah, Georgia for a week of golfing pleasure. He was proud of his upbringing and Italian heritage and customs. In fact, many of his friends highly respected his parents for who they were. By nature, he was a very non-judgmental man with a magnetic personality that drew him to people and made him an instant friend. He was respected by others for the consideration and thoughtfulness he so genuinely showed. Remo planted a vegetable garden every year and spent time working his patch of land that produced many prized possessions including tomatoes, hot peppers, and pole beans that he so generously shared with others. He was a devout patron and parishioner of St. Anthony & St. Agnes Church. A City of Utica Councilman, Remo served his 27th District during the 1970’s and 1980’s, was a former Oneida County Legislator, and most of all managed to remain a friend to all. Remo is survived by his devoted wife, Theresa; his sibling, Sister Mary Irene Zegarelli/OSF; his sister-in-law, Lydia Zegarelli who has been with Remo and Theresa through it all; his nieces and nephews, Vincent Zegarelli, Patrick Zegarelli, Mary Irene and Christopher Hare, and Sam Tantillo; great-nieces, great-nephews, cousins, in-laws, Antoinette Tantillo, Ralph and Roseann Migliaccio, Fran and Sandra Migliaccio, and Judy and Mike Seakan. He is additionally survived by a host of special, exceptional friends who have shared great devotion, not only with him, but with Theresa as well, especially Michael Filippelli, Florio and Rosemarie Vitullo, Fran Joseph, Phil DePerna, Lou Delmonico, and Theresa Pannofino. He was predeceased by his brother, Pasquale A. Zegarelli; father-in-law and mother-in-law, Anthony and Clara Migliaccio; brothers-in-law, Thomas Migliaccio, and Samuel Tantillo; and his lifelong close friends, Lenny Pannofino, Tony Filippelli, and Sal Borruso, Sr. The family will long remain grateful to Dr. Atul Butala who cared for and respected Remo as if he were family. His wife Theresa has heartfelt gratitude for each and every one of the nurses and aides of the Abraham House, Utica location, and the Rome site, a godsend that provided incredible caretakers who went above and beyond in an environment where kindnesses were extended to Theresa, allowing her to remain with her husband until the end. Their motto rang true: Their home was Remo and Theresa’s home. God bless them, especially Gina Ciaccia who was an incomparable advocate. Due to current health concerns and in keeping with federal and state regulations, the immediate family will honor Remo’s life privately. Expressions of sympathy in the form of donations may be directed to the Abraham House online at https://www.theabrahamhouse.org or by mail to Abraham House, 1203 Kemble St., Utica, NY 13501. Please take a moment to connect with Remo’s family through the “Memories” section of his obituary on our website at www.EannaceFuneralHome.com. Our prayers continue to go out to all as a sign of our community support.

UTICA - Mr. Remo A. Zegarelli, age 86, entered into eternal rest on Sunday, May 17, 2020 after a courageous battle with his loving wife at his side. He passed away at the Abraham House Rome location. Born in Utica on March 13, 1934, Remo was... View Obituary & Service Information

The family of Mr. Remo A. Zegarelli created this Life Tributes page to make it easy to share your memories.

Send flowers to the Zegarelli family.