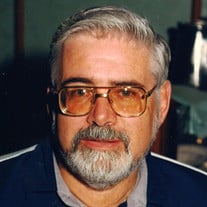 UTICA - Mr. Raymond A. Lawrence, age 75, is now at peace. He passed away on Monday, February 3, 2020 at MVHS at St. Luke’s Healthcare with his loving family by his side. Born in Worcester, Massachusetts on October 2, 1944, Raymond was the son of the late Philip and Barbara (Cronin) Lawrence. He received his elementary and primary education in Massachusetts. He continued his studies at Bentley University and also Clark University with a concentration of courses in Accounting and Financial Planning. On September 5, 1969 in Owego, NY he married the former Anna E. Brainard. Their love was reciprocal, and they were inseparable. They were always there for each other, and when their two children were born, they grew even closer. Ray was employed by Agway for 25 years as a Manager. He then accepted a position with MetLife as an Agency Manager in a number of their branches in New Hampshire and Vermont. In 2004, Ray and Anna returned to Utica to reunite with family and friends. A man of great will and warm heart, he was a loving husband, father, and grandfather. He was protective of his kids, and he shared his wisdom and loving advice with them. He was a trusting person, a man of integrity on many levels. He was an amazing teller of jokes, he knew how to make people laugh. His staunch work efforts and ethics carried him far in providing for his family. He was active with the Boy Scouts, as well as Little League, as a coach and umpire. At one time, he served as Vice President of the Chamber of Commerce in Owego. He was also a Volunteer Fireman and Policeman in both Owego and Barneveld. Family gatherings were an important part of the Lawrence family. Ray enjoyed many holidays with Halloween being a favorite. He observed it with music and decorations outside, and the best popcorn balls ever, that he gave as treats. During the Christmas season, his home was a work of art, embellished with megawatts of lights that caused many people to drive by with exclamations of astonishment and admiration. His hobbies included assembling puzzles, stamp collecting, and showcasing aquariums filled with unique types of fish. He went on to breeding the fish and successfully trained his parakeets to say “Pretty girl”. In retirement, he enjoyed shopping and surprising Anna with special gifts. They also embarked on traveling and cruises to the islands. Ray’s favorite destination was Disney World where he was in “his own little world”. He was a diehard Boston Red Sox fan and he favored the New England Patriots. Ray was a member of the Faith in Christ Fellowship Church. He had faith in his heart, and an abiding propriety in his appearance when attending church. Raymond is survived by his wife, Anna; his son, Philip W. Lawrence; daughter and son-in-law, Kristine E. and Rev. Jeffrey Rogers; grandchildren, Drew, Zachary, Jacob, Bethany, and Arianna Rogers; and his brother and sister-in-law, Ernest and Gail Lawrence. He also leaves his many nieces, nephews, great-nieces, great-nephews, cousins; in-laws, Sharon Lawrence, Patricia and Walter Maki, Jacqueline Brainard, James and Ilene Brainard, John and Linda Brainard, Ted and Lori Brainard, and George Awad, Esq. He was blessed with remarkable friends, Cathy and Jim Hanretty, Jerry and Carolyn Webre, Ron and Marge VanderSchuur, as well as many others close to his heart. He was predeceased by his brother, James Lawrence; mother-in-law, Myrtle Brainard; father-in-law William Brainard; sister-in-law, Billie Jean Awad; and best friend, Ellen Kariku. Ray and Anna were blessed with the love and support of their friends Cathy and Jim Hanretty who were so dependable and reliable in their care for Ray, they are considered part of the family and will never be forgotten. It was through the guidance and perseverance of Dr. Wassel, Dr. Kashtanova, Dr. Krause, Dr. MacIsaac, and Dr. Aiello that Ray was able to endure his health issues. Visitation will be held Saturday from 1:00-3:00 at the Eannace Funeral Home, Inc., 932 South St., corner of Hammond Ave. Those wishing to express an act of kindness in Raymond’s memory may make a donation to St. Jude Children’s Research Hospital online at https://www.stjude.org/donate; envelopes will be available at the funeral home. Raymond’s funeral service and Celebration of Life will commence on Saturday afternoon at 3:00 at the funeral home. Interment will take place in Hope Cemetery in Worcester, MA at the convenience of the family.

UTICA - Mr. Raymond A. Lawrence, age 75, is now at peace. He passed away on Monday, February 3, 2020 at MVHS at St. Luke&#8217;s Healthcare with his loving family by his side. Born in Worcester, Massachusetts on October 2, 1944, Raymond was... View Obituary & Service Information

The family of Mr. Raymond Lawrence created this Life Tributes page to make it easy to share your memories.

Send flowers to the Lawrence family.