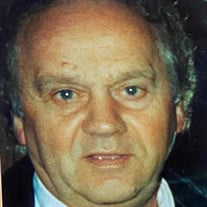 UTICA - Mr. Raffaele “Ralph” Ventura went home to heaven with the love and support of his family on Wednesday, February 10, 2021. He was born on March 22, 1940 in the town of Andali, province of Catanzaro, Calabria, the son of the late Luigi and Esther Giocondina (Grande) Ventura. At the age of 14, along with his mother, and brother Nise, they immigrated to the United States and were soon followed by his family and reunited with them. At one time he was married to the former Johanne Carvelli and to that union came the blessing of their only daughter who was their everything. Marina was his side kick and greatest joy in life, and he was so protective of her. She learned life lessons and she knew by watching her father’s actions and expressions, how much he loved her. He was her mentor, her hero, and his greatest gift was being her dad. As a young man, Ralph worked hard to showcase his talent as a carpenter and earned the good intentions for being an entrepreneur, establishing the Ventura Building Contractors, with many major projects known not only to the city of Utica, some throughout NY state, notably the Sts. Cosmas and Damiano Chapel on Kossuth Avenue. Ralph purchased N.D. Peters Concrete Company, one of his hallmark projects. He was inspired to invest his time, talent, and capital into this venture in honor and memory of his father who was a concrete mason. He ran this business along with his daughter, Marina and her family. His brilliance allowed him to make concrete on site when the Enchanted Forest ventured into one of the largest water parks in NY. Ralph was in control of his own destiny from a young age, and he always aspired to be his own boss, and there was no looking back. A master of many trades, with his knowledge, patience, and precision, Ralph was a gifted master carpenter. On October 24, 1981 Ralph married the former Bernadette Festine. They fell in love on the first day they met, and they were blessed with 39 years committed to each other. He was a wonderful man and the love of her life. She will miss him, forever. Ralph was an accomplished drag racer at the Fonda Speedway who competed and succeeded to win several races and even a race against a very prominent driver on the circuit, and also became a co-owner of the Utica-Rome Speedway for a period of time. Family was foremost, and his daughter was always by his side. His grandchildren adored him because he was an amazing “Poppa”, and there were so many moments in time when he would indoctrinate his talents. He made all the big events in their lives, and his grandkids were loved and attended to. He taught them the values of a good work ethic, love of family, and faith in the Lord. He was a devout Catholic, and a member of St. Anthony & St. Agnes Church. He leaves a legacy of a humble life, hard work and integrity in his career, love of his family, and the embrace and perpetuation of his Italian heritage to the generations that followed. He also imparted bits of wisdom when encountering the ups and downs in life: “It doesn’t get darker than midnight, and the sun will come up again”. God bless. Rest in peace, Raffaele. Ralph is survived by his wife, Bernadette; his daughter and son-in-law, Marina and Michael Latella; his grandchildren who were his pride and joy and his everything, Michael and Brianna Latella, Gianna and Jimmy Giruzzi, and twins Anthony, and Salvatore Latella; and his great-grandchildren, Audrina, and Mila Giruzzi who were his sunshine. He also leaves his siblings and their spouses, Ercole Ventura and his late wife Patricia Anne (Spatuzzi) Ventura, Tosca and Warren Meola, Romolo Ventura, Carlo Ventura; and the memory of his brother Dionisio “Nise” Ventura who passed in 2000. He had an affectionate love for all his nieces; nephews, especially P.J. Rabice who he loved as a son; great-nieces, great-nephews, cousins, in-laws, Armond and Natalie Festine and their children; and his friend Tony Testa who looked to Ralph as a second father, and in kind, Ralph reciprocated and loved him like a son. He was predeceased by his mother-in-law, Nanette Festine. Gratitude is extended to family friend, Tricia Mitchell/Respiratory Therapist who tended to Ralph with kindness and continual support during this difficult time. Visitation will be held Sunday, February 14, 2021 from 3-5 at the Eannace Funeral Home, Inc., 932 South St., corner of Hammond Ave. Relatives and friends are respectfully invited to attend Ralph’s funeral service and Celebration of Life which will commence on Monday morning, February 15, 2021 at 11:00 at St. Anthony & St. Agnes Church where his Mass of Christian Burial will be offered. Face masks are required and social distancing and contact tracing will be implemented at both locations. Ralph will be laid to rest in Christ Our Savior Mausoleum at Calvary Cemetery at the convenience of the family. During this time of social distancing that we are all experiencing, please take a moment to connect with Ralph’s family through the “Memories” section of his obituary. Our prayers go out to all as a sign of our continued support.

The family of Mr. Raffaele "Ralph" Ventura created this Life Tributes page to make it easy to share your memories.

Send flowers to the Ventura family.