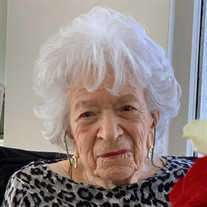 Wellington, FL – Phyllis Allegretto Finn passed away peacefully at the home of her daughter on Monday, May 25, 2020, at the age of 95. Phyllis was born in Utica, NY, to the late Philip and Philomena (Rosa) Allegretto. Her father passed away four months after she was born, a circumstance that shaped her life. Raised through her early years by her loving step-grandmother and grandfather with help from very supportive family members, she attended St. Mary of Mount Carmel parish school, ultimately graduating as the individual, male or female, with the highest grades of any in her Class of 1942 at St. Francis de Sales High School. Throughout her life she kept in touch with her seventh grade teacher, Sister M. Prudencia Ladiski, who had greatly influenced her high school years. Graduating from high school during World War II, Phyllis went directly to work at the newly built Rhoads Hospital, one of the great orthopedic hospitals of the U.S. Army, also becoming involved with the Red Cross onsite. The war ended in 1945, the hospital closed in 1946, and Phyllis became a private secretary in the administrative offices of Hamilton College. In 1949 she married Thomas J. Finn, talented salesman and musician. Phyllis worked for Westinghouse and also for RCA before she joined General Electric Company in 1958, where she then held various positions of increasing responsibility across more than 27 years, obtaining a degree from Mohawk Valley Community College, and continuing at Utica College while working fulltime, and advancing to become one of the first female proposal consultants at GE, thus holding responsibility to prepare company proposals for government projects. Retiring from GE in 1985 to pursue her passions, Phyllis spent winters in Florida, most recently located in Wellington to cheer for her daughter and friends in competition at the Winter Equestrian Festival. She enjoyed playing golf and bridge and always was ready to dance and celebrate no matter the occasion. She was an avid reader and enjoyed writing essays, stories and letters. Always with her camera in hand, she memorialized the significant occasions of her many friends and family earning the nickname Brenda Starr. Travel was a lifetime passion, which led her to achieve her goal to visit all 50 states in the USA as well as to enjoy excursions to such distant places as Italy, Ireland, Spain and North Africa. Always a people person, Phyllis rarely met anyone who did not become a friend. Always active, she was ready to go at a moment’s notice. She had an uncanny ability to relate to persons of any age, from toddlers to the elderly, aware and supportive of the unique interests of each individual. She was an independent adventurer, a classy and special lady. She described herself as “a persuasive, tactful, dependable, enthusiastic, assertive and creative self-starter”. Her smile would light up the room. She will be missed by so many who came to know her and love her through the years. Phyllis is survived by her daughter, Marsha Finn Dammerman; cousin Dolores Manganelli; nephews Anthony (Lauretta) Taurisano, Philip (Barbara) Taurisano, John Talerico, Mark (Linda) Taurisano; second cousins Claudia Manganelli, Diana (Carl) Grimes; her son-in-law’s sister Carol Galloway and brother Randy (Joanne) Burmester; her grandchildren David (Christy Alexander) Dammerman, Heather (David Wesoloski) Dammerman; great grandchildren Eric Dammerman, Craig and Emma Wesoloski; great nieces and nephews Renee Rizzuti, Michele Tomassetti, Marc Taurisano, Jon (Becca) Taurisano, Dana (David) Percia, Anthony Taurisano, Scott (Kelly) Galloway, Wendi (James Henderkott) Galloway, Holly (Mark) Fedorcik, Amy (Brandon) Graham, Jared Burmester; great great nieces and nephews Christina and Catherine Rizzuti, Marisa Tomassetti, Bridget and Caroline Taurisano, Dominick Taurisano, Brandon (Teryn) Galloway, Justin (Britny Shaver) Knight, Amanda (Bob Sievers) Knight, Jakob Galloway, Samuel Henningsen, Palmer and Sawyer Fedorcik, Jaxon Graham; great great great nieces and nephews, Aubrey Knight, Alex, Avery and Henry Sievers; as well as extended sister Sally Burke; extended grandchildren Judy Dore (mother of Eric), Stacy (Joey) DeSabella; and extended great grandchildren Olivia and Carly DeSabella, Allison GiamBruno (daughter of Christy). Phyllis was predeceased by Thomas J. Finn, her sisters and their husbands Lucille (Michael) Taurisano and Marie (Angelo) Talerico, her son-in-law Dennis D. Dammerman, her cousin’s husband Joseph Manganelli, Dennis’ mother Louise Lichtenstein, Dennis’ step-mother Viola Dammerman, his brother-in-law Dwain Galloway, Sally’s husband Gene Burke, and many other family members and dear friends who have sadly gone before her. The family wishes to extend their appreciation to the home health care aides in Saratoga Springs, NY, and in Wellington, FL, as well as to the many friends and relatives who helped Phyllis enjoy her later years. All funeral services will be held privately. In lieu of flowers, please consider making a donation in memory of Phyllis to Abraham House, Inc., 1203 Kemble Street, Utica, NY, 13501, online at https://www.theabrahamhouse.org/ways-to-donate/ or to the charity of your choice. Please take a moment to connect with Phyllis’ family through the “Memories” section of her obituary.

Wellington, FL &#8211; Phyllis Allegretto Finn passed away peacefully at the home of her daughter on Monday, May 25, 2020, at the age of 95. Phyllis was born in Utica, NY, to the late Philip and Philomena (Rosa) Allegretto. Her father passed... View Obituary & Service Information

The family of Phyllis (Allegretto) Finn created this Life Tributes page to make it easy to share your memories.

Send flowers to the Finn family.