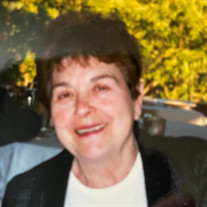 ​UTICA – Mrs. Philomena T. “Fay” (Sisti) Policelli, age 99, went home to Heaven on Thursday, March 3, 2022, in the comfort and dignity of her home, with her loving family by her side. She passed into the Lord’s arms three months shy of reaching her 100th year of life. ​Born in Utica on June 11, 1922, to the late Alessandro and Catherine (Salerno) Sisti, Fay was fortunate to have been educated and graduate from T.R. Proctor High School/Class of 1941. ​On September 27, 1947, Fay married Andrew Policelli. Fay and Andy were a good match, they tended to each other’s needs as well as having good parenting skills that created a very loving family. Together they shared nearly 36 years, prior to his passing on February 6, 1983. ​Fay enjoyed a variety of experiences in her professional life. Her career began with a position at Oneita Knitting Mills, Inc., and then shifted when Fay accepted employment with the General Electric Company at their Bleecker Street location, Radio Receiver Plant. Lastly, she most appreciated her position as a cook at the Clubhouse Tavern located at The CharlesTown Mall; it was here that she blended her natural cooking skills and surrounded herself with old as well as new friends. ​Fay was the “center piece” of her family structure. As a mom, she encouraged those she loved by teaching them optimism. Indeed, she is remembered for reverently supporting them, often saying “This too shall pass.” A wise woman, Fay would share her views, which were welcome to the many who sought her advice. However, Fay was excellent at stepping back and giving others room to make their own decisions. She was a woman adored by her family and was unforgettable to countless others. ​A remarkable cook and baker, Fay’s skillset in the kitchen benefited so many. Her niece Sandy Grounds shared Fay’s love of baking and culinary traditions and she was proud to follow, and will carry on in her aunt’s talented footsteps. One of Fay’s favorite traditions took place on Saturday mornings, which were dedicated to making “Pizza Fritta” for the grandchildren. Fay also prioritized her Italian and religious traditions, honoring the many festivities by hosting them in her home. ​Fay was proud of her children; when they went on to have their own, Fay came to know the next generations with the same level of motherly affection and attunement as the first. Each person Fay helped raise will remember her always, holding her and her loving guidance close to their hearts. ​A talented singer, Fay came from a family who were particularly blessed with the gifting of music. She was known to her musical circle as “Fannie,” and her operatic voice filled others’ hearts. Fay especially appreciated Italian Opera, which brought her so much joy. Additionally, she found pleasure in the memories of gathering with her fellow alum from T.R. Proctor High School/Class of 1941 meeting for lunch, along with her ‘Cousins Club’, and jaunts to the casino. ​A spiritual woman, Fay was a devout Catholic who prayed the rosary daily and called upon the saints for blessings. She was a member of St. Anthony & St. Agnes Church. ​Fay is survived by her children, Cheryl Zammiello and Ron Czepiel, Frank and his wife Angie Policelli, and Diane Policelli of Mill Valley, CA. She leaves behind many beloved grandchildren, Bridget Ames, Laura and George Wolfenden of MA, Richard and Te Walker, and the triplets: Nikolas “Niko” Policelli, Amber Lafay Policelli, and Franklin “Frankie” Policelli. Fay will be fondly remembered by her great-grandchildren, the twins: Andrew Ames, and Marcus Ames; as well as Briasia Ames; and Mia Walker. She was blessed to know her great-great-grandchildren, Aubriella, Juliana, and Andrew Davis. Fay will live on in the heart of her brother, Robert A. Sisti, and his late wife Ginny Sisti. She was predeceased by her additional siblings and their spouses: Rose and Pasquale Brindisi; Palmina and Nick DiNigro; Fred and Yolanda Sisti; Mary and Anthony “Tony” Perta; Gloria and Frank Zammiello; and Alessandro “Alex” and Patricia Sisti. Fay also leaves behind many cherished and beloved nieces, nephews, great-nieces, great-nephews, and cousins. Her life was filled with many wonderful friends who filled her days with love and laughter. Fay was predeceased by her in-laws, Frances and John Chiarelli, and Nicolas and Jane Policelli; as well as by her special cousin, Mary Manca. ​In addition to the care to her children and grandchildren who kept a watchful eye upon Fay, they wish to thank her niece, Sandy Grounds, and her nephews, Pat Brindisi, Anthony Perta, and great-niece, Rosemarie Costello. There were, moreover, many who watched over Fay with such great care, and the family is so grateful for their love. Rene Pezzullo was one who attended to many of her needs with great compassion. ​Visitation will be held on Saturday, March 12, 2022, from 11:30 a.m. to 12:30 p.m. at St. Anthony & St. Agnes Church, 422 Tilden Ave. Philomena’s Mass of Christian Burial will follow at 1:00 p.m. Interment will take place at St. Agnes Cemetery at the convenience of the family.

The family of Mrs. Philomena T. “Fay” (Sisti) Policelli created this Life Tributes page to make it easy to share your memories.

Send flowers to the Policelli family.