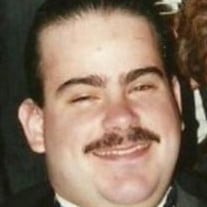 CLINTON/UTICA - Phillip J. “Phil” Perry, age 48, passed away on Friday, December 3, 2021 with his brother, family, and his personal healthcare aide by his side. Born in Utica on July 16, 1973, Phillip was the son of the late William “Billy” Perry Jr. and Mary Lou (Barkett) Perry. He was a graduate of Utica Senior Academy at Proctor/Class of 1991. He continued his education at MVCC where he concentrated his studies in Computer Science. Phil began his work career at the Bank of America Call Center. He also held a position at Human Technology Corporation, and lastly, was a graphic website designer, a skill and calling he truly enjoyed. Although Phil was wheelchair bound from birth and faced life with physical limitations, he was courageous and conveyed great strength throughout his lifetime. As a youngster, he loved to swim and was fortunate to have a pool of his own in his back yard. A kind-hearted young man, he supported anyone who was an “underdog”. His big brother Billy, who has many friends, always included Phil in their circle. Phil was a jokester, and he was downright funny! He was social, and a bit quiet, but his dry humor was always hysterical, and entertaining. Phil favored the sport of hockey, and the Richardson Ave crew always positioned him as goalie because it was so tough getting the puck by him! He also followed local softball leagues, always cheering for his favorite teams and was an avid pool player. Best of all, Phil and his posse of friends always enjoyed hanging out and having a good time. Fiercely independent, Phil always faced his difficulties with fortitude and optimism. He was blessed with a mother who raised him as a single mom and he loved her dearly for all that she could do for him. His brother Billy was a big support to him, and they shared a special, unbreakable bond. His uncle and aunt, John and Patt, were not only family, but they were his godparents who helped in his upbringing as well. Phil enjoyed a great relationship with them and it was one of his greatest blessings. He was also graced with the friendship of his longtime caregiver and aide, Patty, who watched over him with great devotion. But above all, he cherished his childhood in spite of his physical limitations because it was full of fun times and crazy adventures, …a life well-lived with hope and laughter. Phillip is survived by his brother, William P. “Billy” Perry III. His life was enriched with the love of his uncle and aunt, John and Patricia Barkett and their children Barbara Barkett, and her daughter Gabriella; and John and Lisa Barkett and their children Grace, and Jack Barkett; and Anthony Barkett; as well as additional cousins. He is also survived by his caregiver, Patty Stoffle; and his late Mom’s husband, Leon “Red” Wittig. There were many fond memories shared with his longtime friends, Emile Charbel, and Chris Johnson. He was predeceased by his mom, Mary Lou (Barkett) Wittig; his dad, William “Billy” Perry Jr.; maternal grandparents, George and Susan (Lewis) Barkett; paternal grandparents, William and Elvira (DeRoberts) Perry; and his several aunts and uncles, including George F. “Sonny” Barkett, Richard “Dick” Barkett, and Barbara Spinella. The family extends their appreciation to the MVHS at St. Luke’s Healthcare ICU nurses and staff who were outstanding and compassionate; and Fr. Boutros El Hachem who offered his presence bedside with comforting prayers. Relatives and friends are respectfully invited to attend his Memorial Divine Liturgy of the Faithful Departed which will be celebrated on Friday morning, December 17, 2021 at 10:00 at St. Louis Gonzaga Church, 520 Rutger Street, Utica. Regardless of vaccination status, face masks are required in church, to remain in compliance with the state and county mask order.

The family of Mr. Phillip J. "Phil" Perry created this Life Tributes page to make it easy to share your memories.

Send flowers to the Perry family.