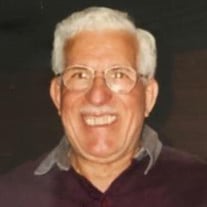 UTICA - Mr. Philip M. Pandolf, age 95, peacefully went home to the Lord on Tuesday, June 15, 2021 while holding hands with his wife Fran as he left this life for the next. Born in Utica on March 7, 1926, Philip was the son of the late Philip and Rosalie (Spina) Pandolfo. He attended T.R. Proctor High School and never forgot his East End buddies. On November 4, 1950 he wed the former Frances L. Pedone, and because Fran doted over Phil all her life, they were connected beyond belief and lived for one another for nearly 71 years! Their union was a wonderful example of a “marriage made in heaven” and a model for their children to emulate. Philip accepted a position during the late 1970’s with Oneida County as a Court Attendant and carried out the duties and responsibilities of his job with kindness, honor, and humility each day. In 1995, at approximately 70 years of age, he found that it was time to retire to tend to his family, relax with friends, and have free time for himself. To this day, the legacy of his impeccable appearance and attire is remembered at the Court House ~ he wore a freshly pressed white shirt, blue blazer, and crisply creased pants, all prepared by Fran, everyday. He was a person of note to those who knew him, especially his special friend, Deputy Al Leone. He was friendly, helpful, and compassionate, and he was blessed to be part of a multi-generational 2-family house on Mohawk Street. It was a home filled with love, where gatherings on Christmas Eve were held downstairs at Phil and Fran’s and New Year’s Eve celebrations were hosted upstairs at Jennie and Tony’s. That home brought a sense of comfort and peace and was a welcoming environment to all; those years were so precious and beloved. They lived in an era when your door was open and you kept your home and possessions in stellar condition. Years ago, Phil was a proficient pheasant hunter, a true outdoorsman, and a passionate fisherman, particularly in the Hinkley Lake area where he brought his boys along with him to bait hooks, bond with each other, and catch and release for hours. He was also a great story teller, often laughing at his own tall tales. Phil lived the role of a family man with great love and support for his wife, children, relatives, and friends. He was the go-to man of the clan, and his stories will never be forgotten. Visiting the casino and dining out were activities Phil and Frannie enjoyed in recent years. He never wanted to miss a moment of life and the many roles he played during his time were gratifying. His accomplishments were nurtured and enhanced through his loving family and friendships he formed. As a dad, he knew the love of his sons who never wished for anything, and never went without. They respected their dad until his final days because he was worthy of their honor. They pray for him to rest in peace among those he missed so much who went before him. Phil was a member of the Teamsters Union Local #182; this membership came from earlier years where he worked for the former Markson & Carriage House furniture stores. A devout Catholic, Philip was a parishioner of St. Mary of Mt. Carmel/Blessed Sacrament Parish where he felt at home, serving as an Usher and proudly wearing his “maroon Blazer” for many years. His pilgrimage to the Auriesville Shrine brought him peace while he prayed at the altars and statues of canonized martyrs and saints. Philip is survived by his beloved wife, Frannie; his sons and daughters-in-law, Philip J. and Kahway “Kay” Pandolf, and David A. and Christine “Chrissy” Pandolf; grandchildren, Kari and Thomas Moloney, and Patrick and Gabriel Crimmins; his great-grandson, Aidan and the anticipation of a second great-grandson. He also leaves his nieces, including Donna Marie Sprague; nephews, great-nieces, great-nephews; cousins, including Danny and Carmelita Vanno, Anna Rose Sanzone, Rosemary Tarnowski, Russell Spina Jr., and Loretta (Spina) Moccaldi; and in-laws, Donna Merhib, and John Pedone. He was the last of many good friends who treasured many great times together. He was predeceased by his father-in-law and mother-in-law, Julio and Franceca Pedone; numerous aunts and uncles; cousin, Antoinette “Toni” Carbone; and in-laws, Philomena Pedone, John “Jack” and Lucy Pedone, Frank Merhib, and Mary Pedone. The family is grateful to Phil’s physicians, Dr. George Tomy, Dr. Emile Wassel, and Dr. Yekaterina Kashtronova who treated Phil and Fran with compassionate hearts and a sensitive touch; the personnel of The Community at Sunset Wood who were so wonderful in accepting Phil and Fran as a second family, from the administration to the care takers who were involved and concerned about them; the MVHS Rehabilitation and Nursing Center staff who opened their hearts and hands in their efforts to heal and rehabilitate; the staff of the Hilton Estate & Elder Law who were exceptional in guiding the family through trying matters; and the staffs of Live Long at Home and Nascentia Health, who treated Phil extra special. The family will honor and commemorate Philip’s life at a private time. Relatives and friends are respectfully invited to attend Philip’s funeral service and Celebration of Life which will commence on Wednesday, June 23, 2021 at 12:00 noon at St. Mary of Mt. Carmel/Blessed Sacrament Parish where his Mass of Christian burial will be offered. The family will receive visitors at the conclusion of the service. Memorial contributions in Philip’s honor may be made to St. Jude Children’s Research Hospital online at https://www.stjude.org or by mail to 501 St. Jude Place, Memphis, TN 38105. Envelopes will also be available at the service. Interment will take place in St. Agnes Cemetery at the convenience of the family.

UTICA - Mr. Philip M. Pandolf, age 95, peacefully went home to the Lord on Tuesday, June 15, 2021 while holding hands with his wife Fran as he left this life for the next. Born in Utica on March 7, 1926, Philip was the son of the late Philip... View Obituary & Service Information

The family of Mr. Philip M. Pandolf created this Life Tributes page to make it easy to share your memories.

Send flowers to the Pandolf family.