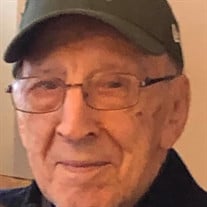 UTICA - Mr. Philip F. Arcuri, Sr., Ret./UPD, age 93, passed away on Saturday, April 25, 2020 with his son and grandson by his side. His beloved wife Theresa and son Louie were waiting for him at the gates of heaven with open arms. Born in... View Obituary & Service Information

The family of Mr. Philip F. Arcuri, Sr., Ret./UPD created this Life Tributes page to make it easy to share your memories.