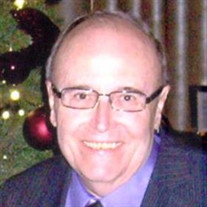 UTICA – Mr. Peter L. Biederman, age 80, passed away peacefully on Friday night, December 24, 2021, with his loving partner Terry by his side. Born in Utica on April 28, 1941, to the late Peter L. Sr. and Dorothy (Eaton) Biederman, Peter was raised in Augusta. There he attended local schools and then graduated from Madison High School/Class of 1958. Peter was fortunate to live in a loving relationship with his partner of over 38 years: Terry Verheecke. The couple shared a lovely togetherness; they idolized each other, always sharing mutual respect and honoring the other’s opinions. Peter’s spent the length of his professional life at Remington Arms Company as a gun inspector. He was consistently a loyal and devoted employee up until his retirement, which became necessary due to illness. Peter was proud to have worked at the same company as his dad. A man with a big heart, Peter shared love abundantly. He considered Terry’s family as his own, and loved them deeply. Peter also enjoyed traveling, especially to Orlando, which he visited annually. Another favorite destination was Provincetown. Additionally, Peter delighted in taking in a show, and was known for frequenting Broadway Musicals. Peter was a very spiritual man who loved to listen to the Word of God. ​He is survived by his loving partner, Terry; his two cherished nephews, David and wife Mary Kirkham, and Dale Kirkham; his great-niece, Megan; and his great-nephew, Matthew. Peter will be remembered by his brother-in-law, Sylvenus “Bob” Kirkham, and he will live forever in the hearts of the extended family members of the Verheecke family, whom he adored. Peter was predeceased by his sister, Beverly Kirkham. ​Terry and the family would like to extend their gratitude to the doctors, nurses, and staff of MVHS at St. Luke’s Healthcare involved in Peter’s care for going above and beyond for him. ​In keeping with Peter’s wishes, there will be no public visitation. A Celebration of Life and Memorial Service will be held for Peter at a later date.

The family of Mr. Peter L. Biederman created this Life Tributes page to make it easy to share your memories.

Send flowers to the Biederman family.