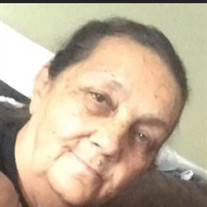 UTICA - Paulette D. (Peters) DeCarlo, age 73, passed away on Sunday, September 12, 2021 and is now at peace from the pain of her health issues. At the time of her passing, those she loved the most were in her heart. Paulette was born in Utica on September 29, 1947. In February of 1971 she married John A. DeCarlo, Jr. She loved John and he loved her. They joined forces and were good parents, raising and providing for their kids the best they could. John passed away on December 26, 2007. Proficient and productive during her employment years, Paulette worked at Abelove Linen, Mele Manufacturing, and CONMED as an Assembler. As a mother, she had such love in her eyes when she saw her children, and was so happy whenever she saw her grandchildren and great-grandchildren. She knew the needs of each of her kids and understood their individual personalities. She was the greatest listener and when they confided in her, she kept their secrets safe. She shared her wisdom only when solicited. Because of her own challenges, she had demons, but she proved to herself that she could change her perspective and lifestyle. Her children were so proud of the inner strength that blessed her soul. The Lord was by her side and turned her life around, and that happened prior to her passing. Amen to her success! This stage of her life was her very best version of herself. Holidays were always exciting, and the kids were happy with whatever presents were there, and that made Paulette happy, as well. Her values were rock solid, and you could depend on her doing her best. Family and friends were important, and if she went to gatherings it was a treat, but she loved her home and her passionate pastimes ~ her couch, her ability to expand her mind through her tablet to play solitaire, other challenging games, and color-by-number. It was through this technology that she saw the world and came to know new ideas and good information the web had to offer. Paulette shared a personal relationship with the Lord, and she was grateful to have raised a family to be self-sufficient and successful in their own ways. She was generous of spirit, and her loved ones never wanted to refuse a gift of her kindness. Paulette is survived by her children and their loves, David Lange, John DeCarlo III and Natalia Bogan, Michael DeCarlo and Lisa Valente, Lance and Saharah DeCarlo, Chastity DeCarlo, Celina Maddox, and the memory of her son Thomas “Tom” Lange who passed away on May 25, 2014; her grandchildren, David Lange II, and Victoria S. Lange; Lance, Lucas, Logan, and Liam DeCarlo; John Vincent DeCarlo, Daniel Patrick DeCarlo; Michael Lee DeCarlo Jr.; Desiree, Eric, and Jasmine Jones, James Winston, Joshua, Javione, Jovanny, Jamari, and Jayceon Butler, and Raven Maddox; nine great-grandchildren; sisters and brothers-in-law, Loretta and Frank Benick, and Charlotte and Jerold McCanny; and was preceded by a brother, Leon Peters. She also leaves her nieces, nephews, great-nieces, great-nephews, cousins; and sister-in-law, Angela Capirci. Paulette had an inseparable relationship with a pair of friends, Greg and Fulton. They were “thick as thieves” and always watched after one another, a true definition of friendship. She was predeceased by her brother-in-law, Francisco “Frank” Capirci. The family extends their appreciation to the nurses and staff of the Special Care Unit and the ICU at MVHS at St. Elizabeth Medical Center where Paulette was content and comfortable under their care. A Memorial Visitation will be held on Wednesday, September 22, 2021 from 3:30-5:00 at the Eannace Funeral Home, Inc., 932 South St., corner of Hammond Ave. Paulette’s Celebration of her Life will follow at 5:00.

UTICA - Paulette D. (Peters) DeCarlo, age 73, passed away on Sunday, September 12, 2021 and is now at peace from the pain of her health issues. At the time of her passing, those she loved the most were in her heart. Paulette was born in Utica... View Obituary & Service Information

The family of Paulette D. (Peters) DeCarlo created this Life Tributes page to make it easy to share your memories.

Send flowers to the DeCarlo family.