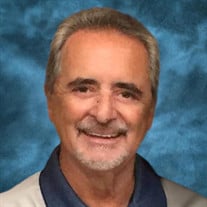 NEW HARTFORD &#8211; Mr. Paul Rosario Salvo, age 80, experienced a beautiful and peaceful passing Tuesday afternoon, March 8, 2022, with his wife and two daughters by his side. Born in Utica on December 18, 1941, to the late Rosario, Sr. and... View Obituary & Service Information

The family of Mr. Paul Rosario Salvo created this Life Tributes page to make it easy to share your memories.

Send flowers to the Salvo family.