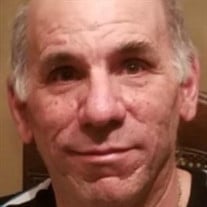 UTICA/SCHUYLER - Mr. Patrick A. &#8220;Pat&#8221; Marino, age 67, passed away unexpectedly on Monday, November 8, 2021. He is now reunited and was welcomed into heaven by his beloved dad, Anthony, and sister, Antoinette. Born and raised in... View Obituary & Service Information

The family of Mr. Patrick A. "Pat" Marino created this Life Tributes page to make it easy to share your memories.

Send flowers to the Marino family.