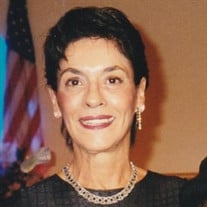 Patricia C. “Patti” (Sebregandio) Russo, age 82, passed away on Wednesday, October 6, 2021, after an arduous struggle with health issues and dementia. Born in Utica on December 26, 1938, to the late Frank A. and Josephine R. (Circelli) Sebregandio, Patti would grow into a loving caretaker with a large impact on those around her. Patti began her professional caretaking career when she graduated from T.R. Proctor High school and attended St. Elizabeth’s School of Nursing. She then continued her education at Syracuse University, where she earned her BA in Nursing. While at SU, Patti achieved membership in the most prestigious honor society: Phi Beta Kappa. She was a Board-Certified Registered Nurse who would find occupational and personal success in many healthcare facilities in both Utica and Florida. Patti’s career as a nurse was truly her calling, an answer to her vocation. She brought many excellent qualities to her profession: an astute mind, an admirable work ethic, professionalism, and passion. Of all the places she worked, Patti especially appreciated her position and the comradery in the office of Dr. George Kozminski. At one time, Patti was married to Michael G. Seakan, with whom she was blessed to have two children. Later, she found love once again and wed Dr. Gary Stone, and the two were graced with a daughter. Patti then found herself lucky in love to be reunited with Paul Russo, who passed away on June 27, 2014. To Patti, family connection was important, and she always held them close to her heart. She deeply valued and loved her parents, her siblings, her children and their loves, as well as her grandchildren and great-grandchildren. As a mom, she uniquely appreciated each of her children’s accomplishments and let them know how proud she was of them. Patti was energetic and ahead of her time – a very forward thinker – who advised others to know their independence and self-worth. She was known to give all kinds of sage advice, and many considered her a role model. Patti particularly promoted education and encouraged others to see their greatest potential – a rule she lived by in her own life. She valued learning and was an avid reader who enjoyed Janet Evanovich novels, as well as biographies. Patti was a fashionista! Her appearance was important to her, she was always absorbing the latest styles, and gaining knowledge from reading fashion magazines. Patti was a well-traveled woman. She greatly appreciated art and music, devoted time to painting, and collecting paintings. Jazz and Classic Rock were Patti’s favorite music genres. She favored Leonard Cohen and CNY Artist, Nancy Kelly. Additionally, Patti enjoyed settling into a good reality TV show, as well as the classics: I Love Lucy and The Golden Girls. Patti is survived by her children and their families, Michael J. and Estelle Seakan, Rebecca Stone and her husband Michael Crain, and the memory of her cherished daughter Laurie Ann Mallozzi. Patti also leaves behind her grandchildren, Ashley Seakan, Michael V. Seakan, and Cora Owens; Vincent and Carey Mallozzi, Frank Mallozzi and Kristen Freeman; Amorette and Timothy Cavanaugh, Jr; and Aiden, and Kai Crain; and her great-grandchildren Dante Mallozzi, Angelo Mallozzi; Timothy Cavanaugh III, Jada Cavanaugh. Patti will be remembered by her siblings and their loves: Peter and Margaret Sebregandio, and Jackie and Dick Talerico; as well as her cherished nieces, nephews, great-nieces, great-nephews, and cousins. Finally, Patti leaves behind her numerous friends who were dear to her. The family would like to extend their gratitude to the staff of the Bryant Unit of the Lutheran Home, especially Nurses Kelly, and Amanda. In addition, the family will be always grateful to Jackie who was particularly attentive to Patti, and her special “Angel” Tatiana Ferrone; both of whom were great at caring for and sharing companionship with Patti, which made all the difference to her. Visitation will be held Friday evening, October 15, 2021, from 4-6 at the Eannace Funeral Home, Inc., 932 South St., corner of Hammond Ave. Her Celebration of Life will follow at 6:00 p.m. officiated by a cherished friend, Rev. J.L. Griffin. Memorial contributions in Patricia’s honor may be made to St. Jude Children’s Research Hospital online at www.stjude.org/donate/; envelopes will also be available at the funeral home.

The family of Patricia C. “Patti” (Sebregandio) Russo created this Life Tributes page to make it easy to share your memories.

Send flowers to the Russo family.