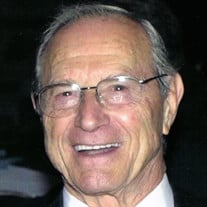 UTICA - Mr. Pasquale J. “Pat” Santacroce, age 91, passed away from injuries sustained in a previous fall. His passing occurred on Monday, February 24, 2020 at the Abraham House with his loving family by his side. Born in Schenectady on December 30, 1928, Pasquale was the son of the late Joseph and Lucy (Della Rocco) Santacroce. He was a graduate of Utica College of Syracuse University and attended the College of St. Rose. He was married to “his angel” the former Alberta Paliotta (daughter of Albert and Mary Pastorella Paliotta) for 67 years. Pat was known as “the happiest man in the world” and “Mr. Music Man”. He was the vocalist at the former Trinkaus Manor for 26 years and a noted musician who performed throughout the state in nightclubs and bands. He was announcer and vocalist for La Banda Rosso (Red Band) and a member of the St. Anthony Parish and Our Lady of Lourdes Church choirs. In the year 2000, Pat and his fellow musicians were invited to entertain throughout Taiwan in celebrating their “Festival of Lights”. At one time he held the position of President of the Knights of St. John, Master of the Carducci Lodge of Free Masons, member of Oriental-Faxton #224 Free & Accepted Masons, Orator and member of the Board of Sons of Italy/Italian Heritage Club of Mohawk Valley, Director of Il Coro Italiano, and Yesterday’s Senior Ensemble. For over twenty years he was a Docent at MWPAI. On July 7, 2012, Pat and Alberta were honored with the Bridge Building Race Relations Celebration Award for outstanding contributions in promoting positive change in our community. He was recognized by an Act of Congress for his service with the USO during World War II. Pat’s professional achievements were his Musical métier, as well as his teaching career in the Utica City School District where he provided decades of individualized instruction to students with behavioral or educational challenges. He built an amazing rapport with his pupils, and he earned their respect. But above all else, Pat was a loving patriarch; his deepest devotion was for his family and his greatest grace was a lifetime of Sundays and holidays they spent together. Pat leaves his wife, Alberta; his sons, Louis Albert (Jessica Szabo), Albert Patrick (Mary, who was like a daughter), and the memory of Pat Marion who was killed at age 14 by a careless young driver; grandson, Jack Albert Santacroce who was the “apple of his eye”; granddaughter, Danielle Nelson and her daughter Gemma Guyot-Bender; his brother and sister-in-law, Joseph and Lois Santacroce; and nephews, Joseph Jr., and Ricky Santacroce. He was preceded by his sister, Mary Rourke. The family wishes to thank the physicians and nurses of the MVHS @ Faxton-St. Luke’s ICU, PCU and Special Care Departments. Gratitude is also extended to the staff and volunteers of the Abraham House for making Pasquale’s last days most comfortable. The family honored Pat’s life at a private time. Relatives and friends are respectfully invited to attend Pasquale’s funeral service and Celebration of Life which will commence on Saturday, March 7, 2020 at 1:00 at the Church of Our Lady of Lourdes where his Memorial Mass of Christian Burial will be offered. The family will receive visitors at the conclusion of the service. Expressions of sympathy in the form of donations may be directed to the Abraham House in Pat’s memory online at https://www.theabrahamhouse.org/donate; envelopes will also be available at the service. Inurnment will take place in Calvary Cemetery at the convenience of the family.

UTICA - Mr. Pasquale J. &#8220;Pat&#8221; Santacroce, age 91, passed away from injuries sustained in a previous fall. His passing occurred on Monday, February 24, 2020 at the Abraham House with his loving family by his side. Born in Schenectady... View Obituary & Service Information

The family of Mr. Pasquale J. "Pat" Santacroce created this Life Tributes page to make it easy to share your memories.

Send flowers to the Santacroce family.