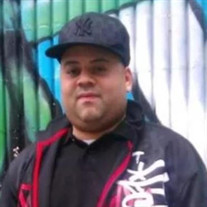 UTICA - Mr. Orlando “Landie” Lugo, age 46, went home to the Lord on Monday, January 25, 2021 when he passed away unexpectedly with those he loved most in his heart. Born in New York City, NY on September 28, 1974, Orlando was the son of the late Samuel and Sandra (Ramos) Lugo. He attended Andrew Jackson High School in Queens and went on to attend Apex Trade School where he became certified in Air Conditioning & Refrigeration. Landie shared 29 years of his life with Samantha McDonald. He was a good man who made her laugh, and he loved his “Sam” with great affection. A native of the Big Apple, he traveled and resided in Wisconsin and then Florida, and he finally found his way back to Utica to be closer to his family who brought him peace. He held multiple jobs as a chef at various area restaurants, an occupation he favored because he loved to cook. He was hospitable and could prepare anything, especially his signature chicken wings, and his delicious spaghetti and red sauce which he loved. Landie was a loving, caring person and the backbone of the family who loved him so much. He kept strong when he was weak, and he never revealed his ailments. His intention was to keep a smile on his face and keep others laughing. Landie loved music, particularly R&B, Hip-Hop, Freestyle and Spanish songs. He had a vast memory and a knack of identifying the title of a song and the artist who sang it before anyone else could! He was a high-class man who was very well put together and worked hard for his family so they were taken care of. A native New Yorker, he was a fan of the New York Yankees and the New York Jets, and he took an interest in all sports, including soccer, football, and basketball. He coached his two sons’ football team, and he expected them to play the best they could and display good sportsmanship. He was so proud of them. When Thanksgiving came, all the cousins got together and played football; it was their yearly tradition! Family life was about being with his boys, and with his love Samantha, whether playing a sporting game, competing in a video game, skating in the park, or dining out. Even going to Walmart was fun with him! His sons credit their father for teaching them how to treat women respectfully, how to manage their finances, what their priorities in life should be, and how to be good men at a young age. Landie leaves a legacy of love for his kids and family, and wanted them to be close to him, just as he knew the Lord was always with him during his health trials. Orlando is survived by his love, Samantha; his sons, Gregory Lugo/US Army and fiancée Elizabeth, and Jason Lugo; and his siblings, Danny Lugo and Lyn Geigel, Millie Lugo, Richard Lugo, Doris Lugo, and the memory of his brother Samuel Lugo Jr. who preceded him in death. He also leaves many nieces, nephews, great-nieces, great-nephews, cousins, aunts and uncles that he loved very much; in-laws, Dion Neal, Renee Jenkins, Monique Jenkins, Tyessia Neal, and Jermaine Neal; and his great number of friends that he loved equally. He was predeceased by his maternal grandmother, Gregoria Figueroa; maternal grandfather, Mikey Figueroa; paternal grandparents, Jose Antonio Lugo and Doris Lugo Cruz; and his cousin, Denise Torres. The family will honor and commemorate Landie’s life at a private time. During this time of social distancing that we are all experiencing, please take a moment to connect with Orlando’s family through the “Memories” section of his obituary. Our prayers go out to all as a sign of our continued support.

The family of Mr. Orlando "Landie" Lugo created this Life Tributes page to make it easy to share your memories.

Send flowers to the Lugo family.