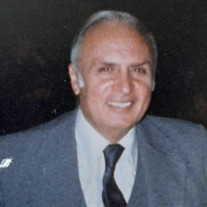 UTICA - Mr. Nicholas R. “Nicky Boom” Vatalaro, Sr., age 95, gently passed away on Friday, April 23, 2021 with those he loved most in his heart. Nick was the beloved son of the late Raffaele “Ralph” and Lillian (Nicotera) Vatalaro. When married to the former Catherine Moran, they knew the blessing of their 5 children; Katie passed away in 2006. Nick’s professional career included New York Central Railroad in an administrative position, Utica Mutual Insurance Fund as a Claims Adjuster, and the State of New York Department of Labor/Division of Unemployment as an Investigator. He was a deep-rooted traditionalist who leaves a legacy of family pride. He respected traditions passed on by his father, taking over his gavel as Secretary of the Castagnese Society and tending an abundant vegetable garden. Nick enjoyed deer hunting with family and friends, especially at the Nicotera “Hunting Camp.” He will be remembered for his commitment to his community, being a staunch Republican serving as County Legislator. A faithful Catholic, he was a member of St. Agnes Church where he served many years as an usher and honored the merging with St. Anthony’s parish. He loved to attend Mass until his health prevented him from doing so. He enjoyed life. Nicholas was predeceased by his sister, Marie Vatalaro; and brothers and sister-in-law, Ralph Vatalaro Jr., and Dominick “Dick” and Pauline Vatalaro. He is survived by his children, Ray Vatalaro, the memory of his son Nicholas R. “Nicky” Vatalaro Jr. who preceded him on 9/6/18, Beth Davies (Bob), the memory of his daughter Lil Vatalaro who passed away on 10/16/20, and Kevin Vatalaro and Lily Oh; grandchildren, Mary Kay Vatalaro-Tyksinski, Jacqueline Vatalaro, and twins Sandra Vatalaro and Nicholas R. Vatalaro III; Allison, and Brian Davies; Tessa, and Hanna Vatalaro, and the memory of his granddaughter Jenna Vatalaro who passed in 2007; and several great-grandchildren, including Michael, and Addison. He also leaves sister-in-law Judith Vatalaro and her 5 daughters, other nieces, nephews, great-nieces, great-nephews, and cousins. The family extends their thanks to the Placid staff at the Masonic Care Community who were amazing and graced with kindness and attentiveness. The family remains so grateful for all the love and compassion they shared that was of such comfort; and Fr. Arthur Krawczenko who administered the Anointing of the Sick to Nicholas who passed into heaven shortly after receiving the Sacrament. Visitation will be held Friday, May 7, 2021 from 11:00-12:30 at St. Anthony & St. Agnes Church where his funeral service and Mass of Christian Burial will commence at 1:00 p.m. Face masks are required and social distancing and contact tracing will be implemented. In lieu of flowers, donations in Nick’s memory in honor of his love for children and compassion for their wellbeing may be made to St. Jude Children’s Research Hospital online at https://www.stjude.org. Envelopes will be available at the service. Interment will take follow graveside in Calvary Cemetery.

The family of Mr. Nicholas R. "Nicky Boom" Vatalaro, Sr. created this Life Tributes page to make it easy to share your memories.

Send flowers to the Vatalaro family.