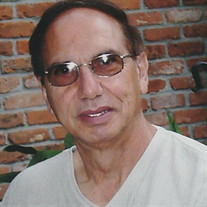 HACKETTSTOWN, NJ/UTICA – Mr. Nicholas “Nick” Angrisano, age 80, passed away unexpectedly on Monday evening, October 11, 2021, with his beloved family by his side. Nick resided in Hackettstown, NJ throughout his adult life, but was born in Utica, where his heart always belonged, on February 23, 1941 to the late Gaetano and Constance (Botta) Angrisano. He was a graduate of T.R. Proctor High School/Class of 1959. Nick then enlisted in the United States Marine Corps. He was a proud veteran, having served 4 years during the Vietnam Era. Nick was the rare kind of man who only came around once in a lifetime. The best of husbands, he married Caren Craska on May 1, 1971, and they were blessed to celebrate 50 years of marriage. Nick was easy-going and very sincere; he prioritized being a good husband and father. When Nick and Caren had their son Randy, Nick felt his life was complete. After they united in marriage, Nick and Caren relocated to NJ in order to further his career opportunities. There, Nick worked as an HVAC Technician and Pipe Fitter, in industrial and commercial installation, at Fritz and Sons, and KeySpan. He retired in 2008, after 40 years of dedicated service. Nick’s son and then his grandchildren always brought a sparkle to his eye. His love for his family drove him, and he was thrilled to have his granddaughters and his nieces and nephews in his life. While in NJ, Nick’s niece and nephew were an everyday part of his life while they were growing up; as well as his nieces and nephews in Utica who were so precious to him and always in his heart. Holidays and family get-togethers touched his soul. Nick was blessed to experience both with his two families – the NJ clan and the Utica one, especially times at Mary’s house who was so welcoming and was always known to welcome others by proclaiming “Mangia,” which quickly grew to be a term of endearment amongst the family. Nick lived an abundant life – one full of activity and adventure. He loved to travel, especially taking cruises, and eagerly enjoyed live entertainment. Nick and Caren annually traveled with family and friends from Utica, which led to many treasured memories. Everyone got along incredibly, with common travel habits, and a common desire for laughs and unforgettable times. When he wasn’t traveling, Nick would rise early to be out of the house by 8:00 am, so he could join the guys for coffee and lively conversation. He also enjoyed responsibly partaking in gaming at casinos – he was so often on the move! In fact, Nick led this quality of active lifestyle right until his last three weeks on this Earth. Though some of Nick’s dreams had been interrupted, he still strove to make life as fun and amazing as possible, and was a good friend to those who knew him. Nick was others-oriented and consistently willing to pitch in and help where there was a need. Furthermore, he was a respectful person, a non-combatant, who could agree to disagree with others. Nick was a man led by his values. He was a humble man, and a devout Catholic who attended weekly Mass, even serving his parish as an usher. His faith kept Nick grounded, and he was filled with gratitude for his many blessings. Nick’s life was bountiful, and each season of it was blessed – for him and for those who knew him. Nick is survived by his wife and best friend, Caren; and his cherished son, Randy Angrisano. He also leaves behind his adored granddaughters, Katelyn Angrisano, and Addison Angrisano; his inspiring nieces, nephews, great-nieces, and great-nephews; his sister-in-law, Norma Angrisano; brother-in-law and sister-in-law, Thomas Jr. and Bridget Mauro; and the many wonderful friends Nick was fortunate to have. Nick was predeceased by his sisters and brothers-in-law, Mary and Nicholas Cavallaro, and Josephine and Walter Parzych, Sr.; his brother, Jack J. Angrisano Sr.; and his mother-in-law and father-in-law, Betty Jane and Thomas Mauro. Visitation will be held on Friday, October 22, 2021, from 10:30 – 11:30 at Eannace Funeral Home, Inc., 932 South St., corner of Hammond Ave. Nick’s Mass of Christian Burial and Celebration of Life will follow at 12:00 noon, at St. Anthony and St. Agnes Church. Committal services will be held with Military Honors conferred by the U.S. Marine Corp. and the New Hartford American Legion Post #1376 Color Guard in Calvary Cemetery.

The family of Mr. Nicholas "Nick: Angrisano created this Life Tributes page to make it easy to share your memories.

Send flowers to the Angrisano family.